Last weekend, local gamer Marc Fluitt and I got together to play a game of FiveCore using my pulp adventure figures.

The setup of the game was pretty simple.  Soldiers of a local Chinese warlord captured Dr. Lashwood on site at his most recent archaeological dig.  They are dragging him and a crate of priceless artifacts through the jungle and back to their leader's stronghold.  Several US Marines managed to outflank the Chinese and cut off their retreat.  To win, my Chinese must carry Dr. Lashwood and the crate of artifacts off the north table edge beyond the Marines.  Marc's Marines win if they rescue Dr. Lashwood, capture the artifacts, and carry them off any other table edge.

My Chinese soldiers started at the south (bottom of the picture), ready to push forward. Marc's Marines are at the north end of the table. One is hidden behind a tree. 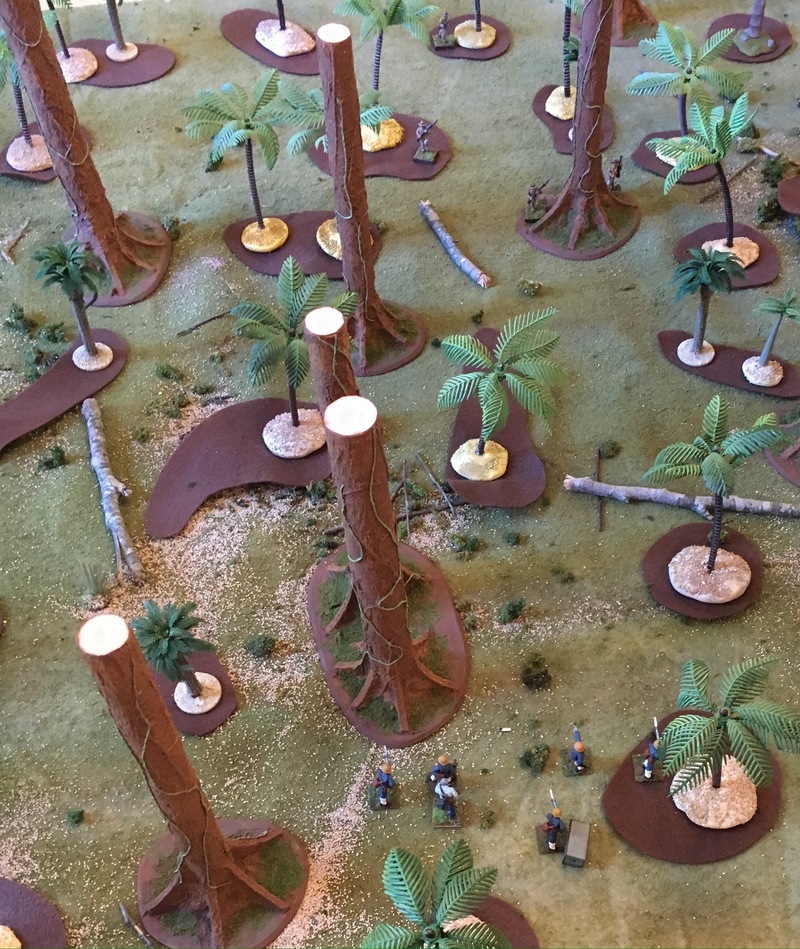 I moved to the west in my first activation,  hoping to flank the Marines and deal with them a few at a time.  This didn't work so well. Marc moved over to intercept me. 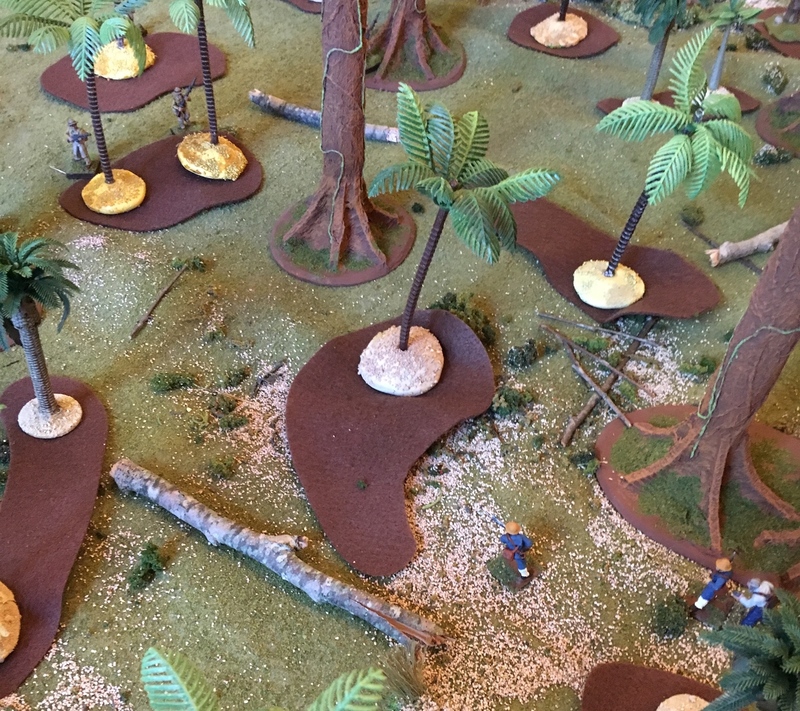 I took the first casualty, the soldier in charge of Dr. Lashwood was gunned down by the marine at the top center of the picture. The good doctor, now free, fled the gunfire and took cover to the south. 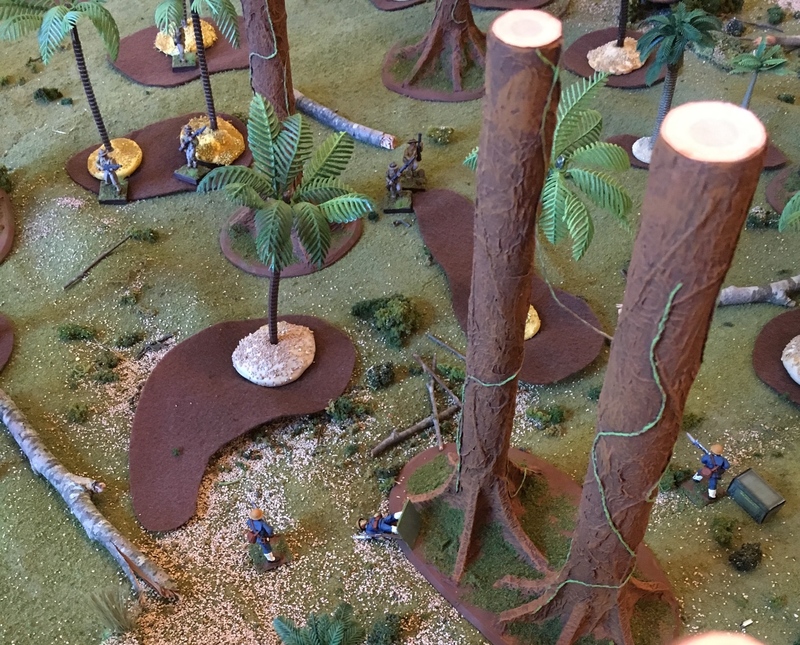 A convenient Scurry result let me shift everyone left into cover and chase down Dr. Lashwood again. 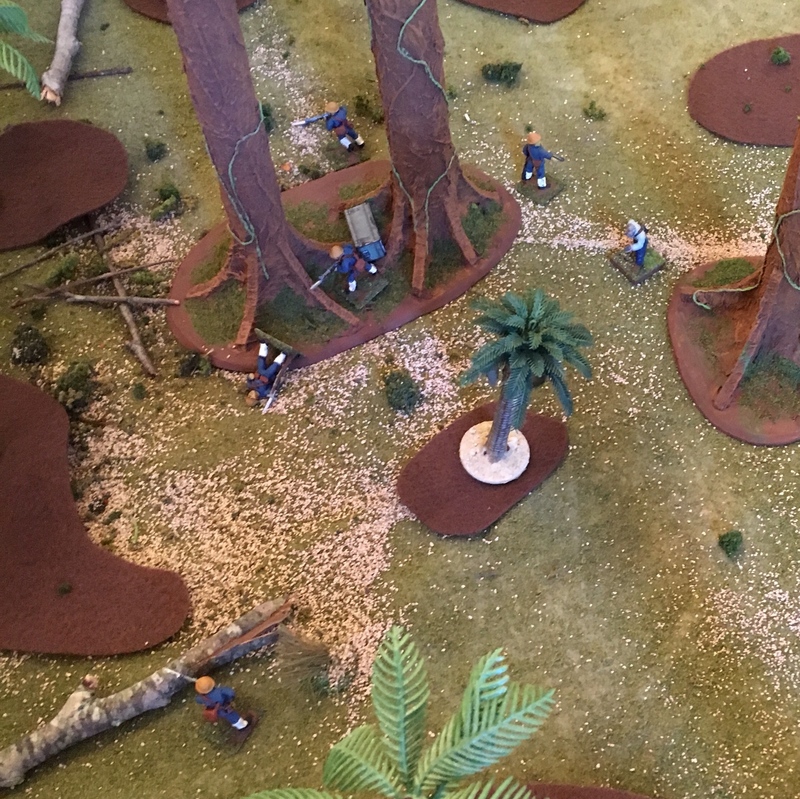 But this let the Marines move to cut me off, too. 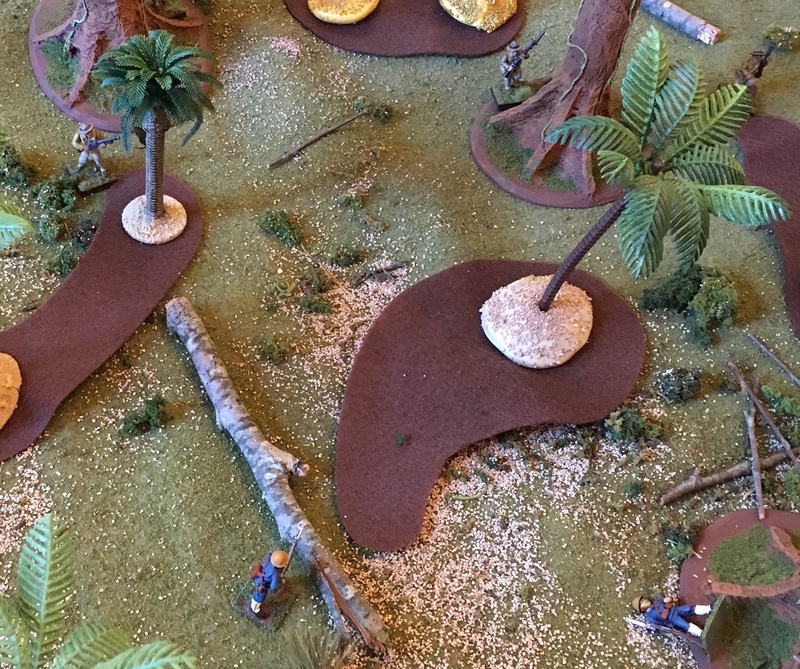 I pushed forward into some of the thicker growth, but took fire and lost another soldier. 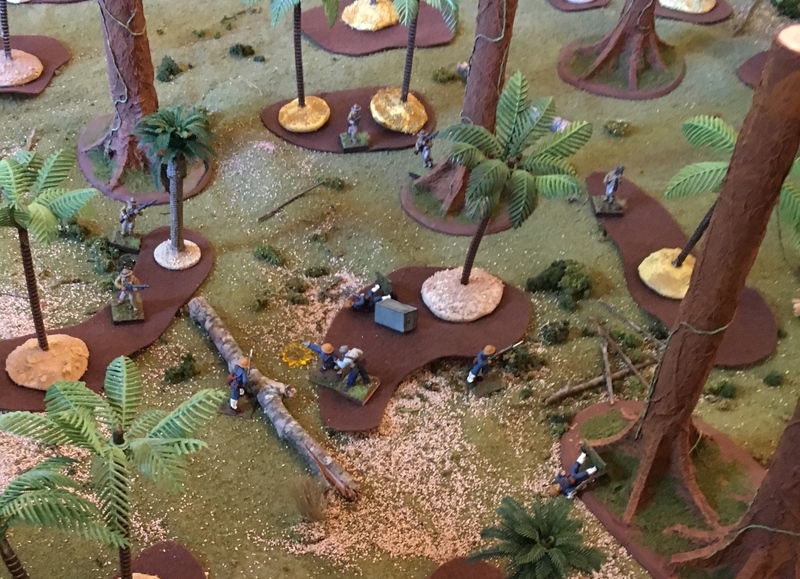 At last my men figured out how to shoot straight. They killed one of the Marines and knocked another down.  Things are starting to look up. 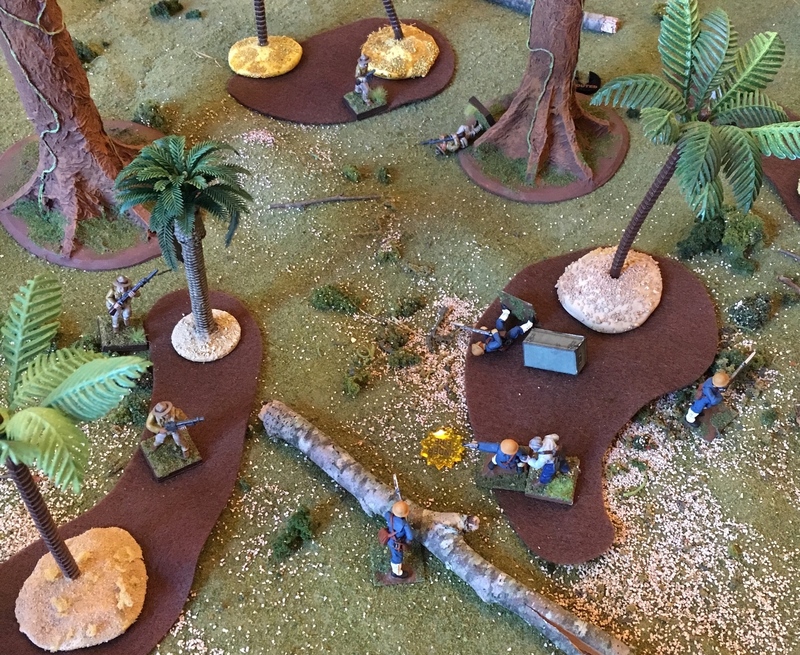 I continued my flanking maneuver, but it just wasn't working out. 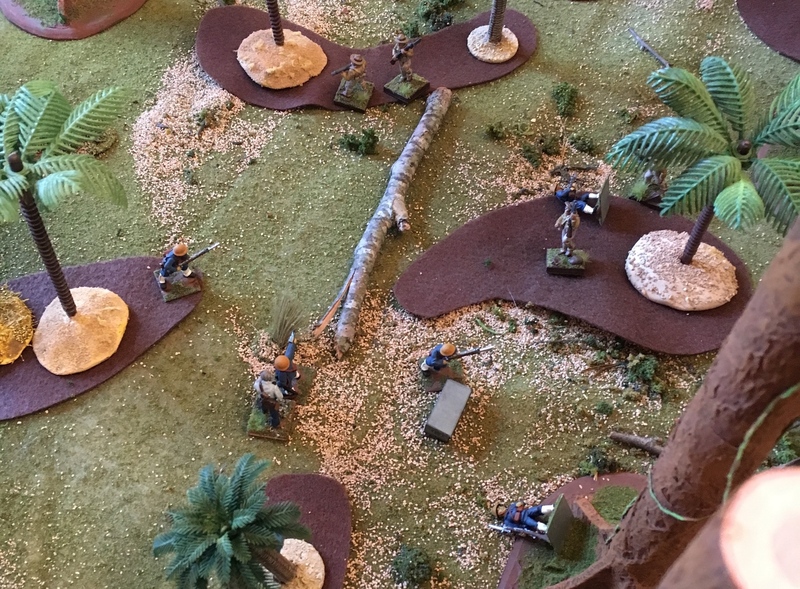 So I reversed direction with another Scurry, going back to the east while his men were out of position. 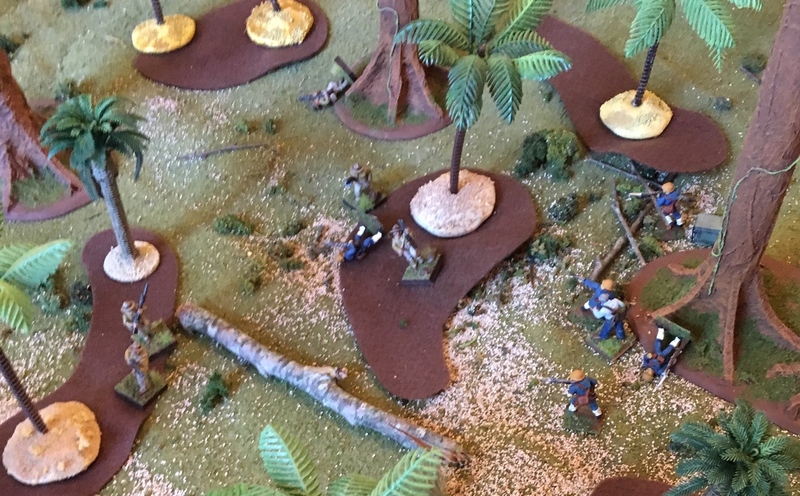 Marc chased me down, of course. 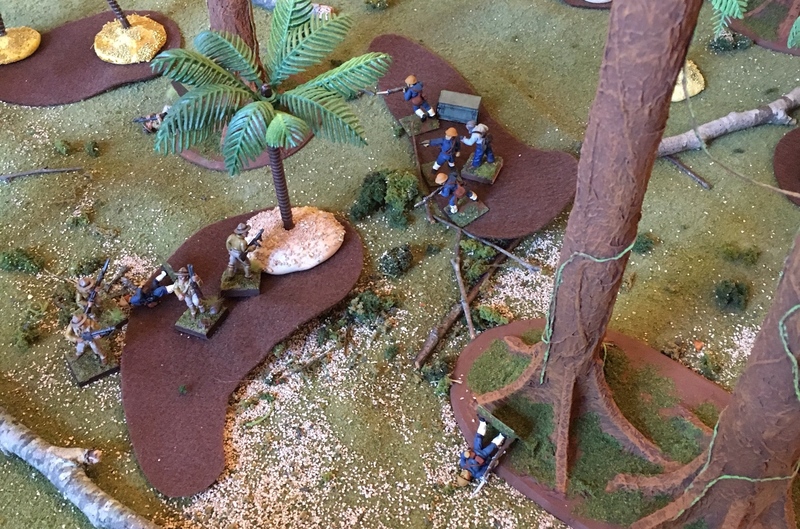 He charged into close combat, driving my men back.  I couldn't hit the broad side of a barn, and he drove me back. 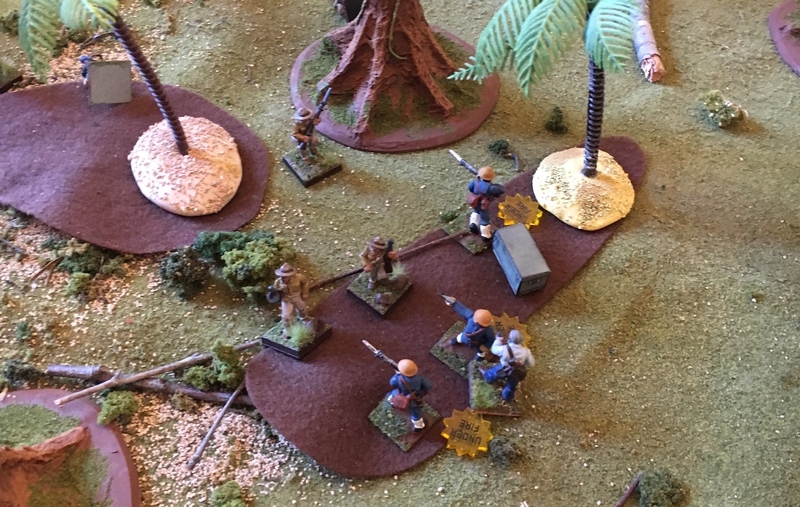 He tried it again, but this time we found the good bullets. We left one dead and scared off the other. 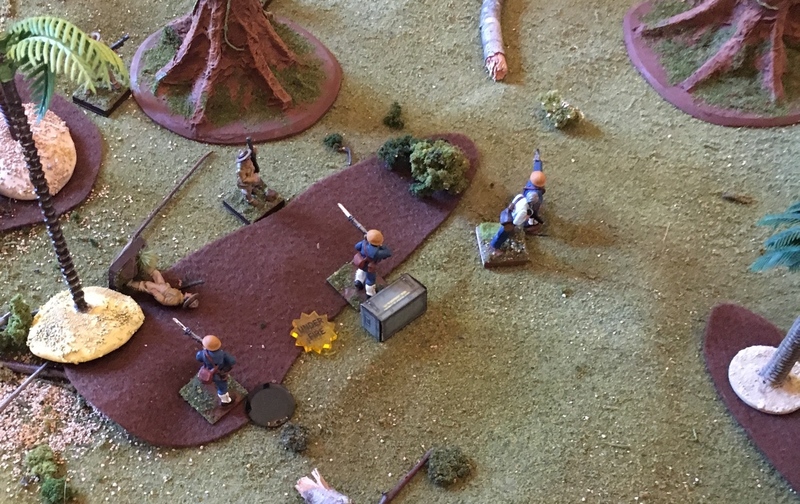 With the Marines in disarray we tried to get moving to the far end of the table. 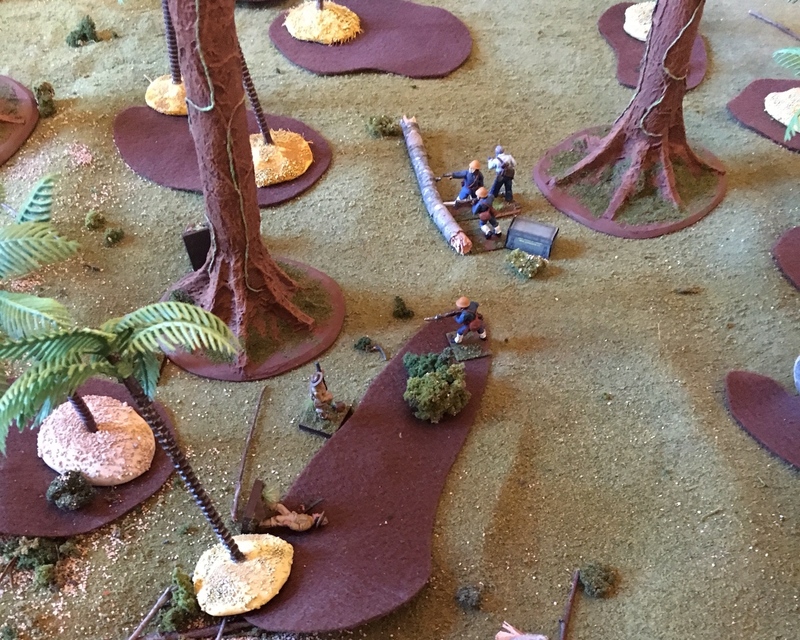 But Marc rallied his Marines and charged me again. This time he succeeded. 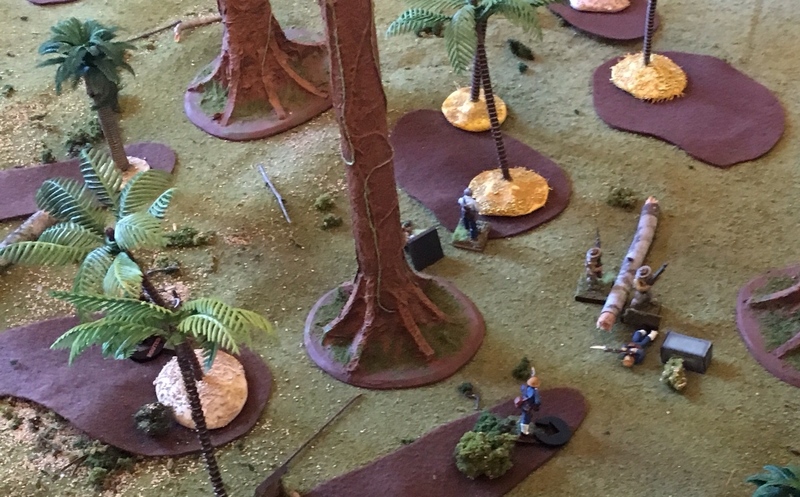 Marc collected the artifacts and Dr. Lashwood, and quickly exited the battlefield.

Failed recovery rolls left me even more out of position as he pulled out of contact. 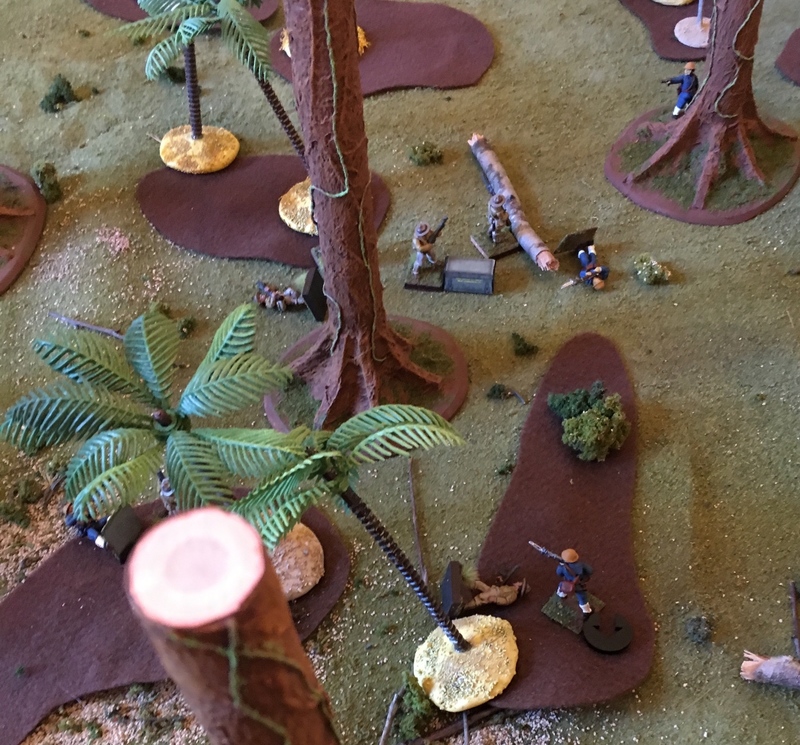 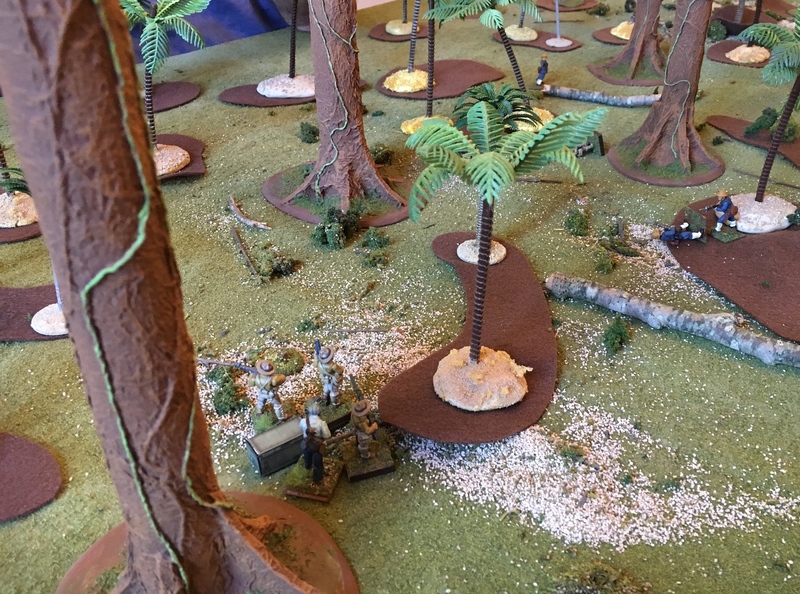 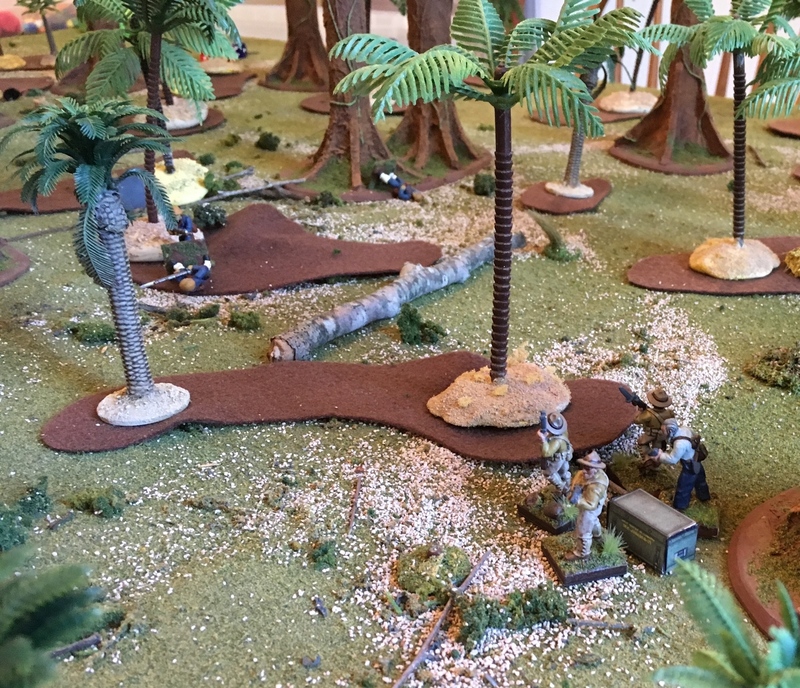 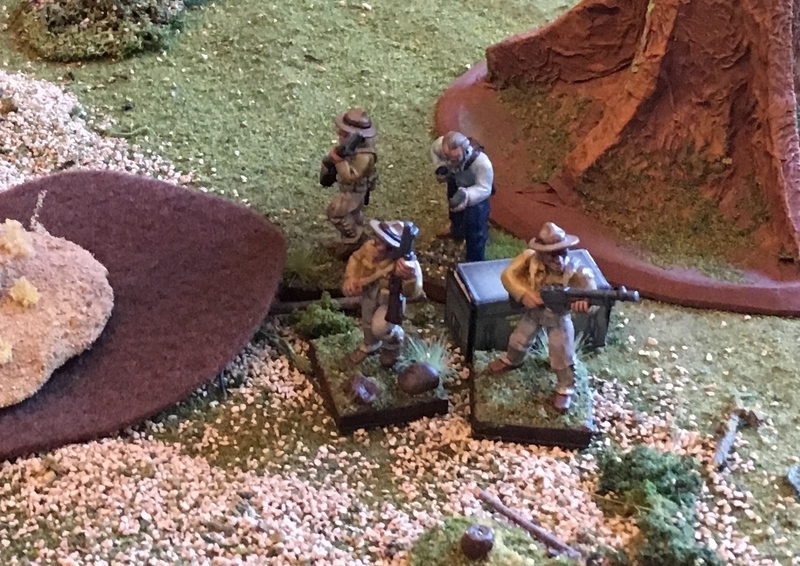 We we had a lot of fun, and the advantage shifted several times. There were a few points where I was sure I was home free, only to have it go wrong again.

I am planning to run a pulp game at Bayou Wars this year. I have some terrain work to finish up and then I'll be ready to go.

It's been a couple months of slowly plonking away at figures as I find the time. But I've finally completed the archaeologists I'll need for Bayou Wars, as well as another unit of Zeppelin Troopen. 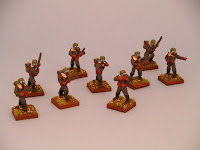 This week I want to build some hills, rocky outcroppings, and jungle vegetation to fill out the table. I also need a narrow trail that will cross the table; I can use my road pieces, but I want something less built-up, more like a track that's been hacked out of the jungle. We'll see how it comes out.

This week I've been finishing up an old project, some more bocage for Crossfire, while getting my Pulp Figures zeppelin troopen ready for painting. 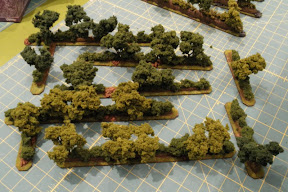 These were built as shown on This Very Blog. It's a quick and straightforward method, and looks good on the tabletop. 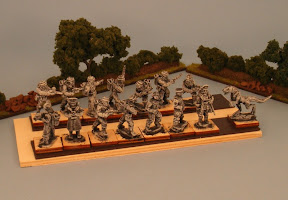 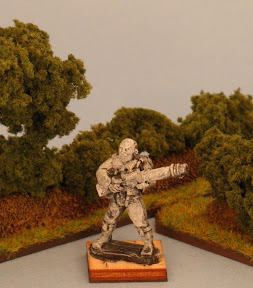 Converting this guy was quite fun. When I looked at the guy on the top left here, he looked to me like a big burly type who should be lumbering around the battlefield firing a machine gun from the hip. So I took the guy on the right here, and hacked the gun out of his hands. I took an extra Maxim I had laying around and cut it down a bit to fit. Then I cut off their heads (muttering "Ach! Mein Kopf!" all the while, of course) and glued them on each others' bodies. 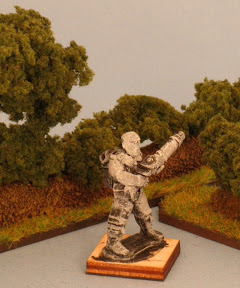 Well, looks like I failed in that whole "post every month" thing. Based on the idea that "If I can't clear my height, why can't I clear one inch above my own height" (thanks Bill), let's see if I can manage a post every week instead.

I've got a few things in the project queue for this year. As mentioned before, I'm planning to run a pulp game for Bayou Wars this year. For that I need to acquire and paint more figures (I want 15-20 figures per player, divided in 2-3 squads each), and make a lot of terrain.

I'm working on some Ebbles Miniatures vehicles and ground equipment to go with my 15mm sci-fi. The pieces are actually 25mm scale; the miracle of print-your-own lets me rescale it to 60% to match my figures.

I've also got a secret project. I am calling it "Highway Robbery", and I'll let people guess what it might be as progress develops. If it's done in time, I'll run it as a Sunday brain-dead game at Bayou Wars.
I didn't make it, too much else I had to do today. But all that is left are some washes and highlighting, and cleaning up the rocket packs and painting those. It shouldn't take long to do that tomorrow. Maybe I can claim Thursday didn't count. :p 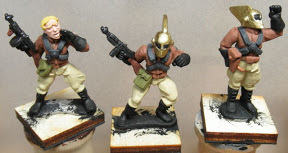 No work done yesterday, I spent the evening playing operation on my computer and then reinstalling everything. What fun.

Today, I painted up the harnesses for the rocket packs in Ceramcoat "Charcoal", ammo pouches for the SMGs in Timberline Green, and pistol holsters in Autumn Brown same as the jackets. 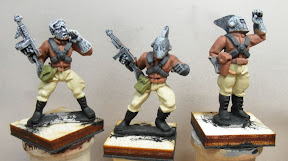 Tomorrow is my last day. Hopefully I can get gloves, weapons, helmets and the occasional bare head, plus some washes and highlighting, done in one day. We'll see.
Today I started with a heavy drybrush of white over top of yesterday's black primer. This should give them a subtle shading under the blocked in paint, as well as bringing out all the details so I can actually see what I am painting. I didn't worry about the boots, since they will be painted black anyway. 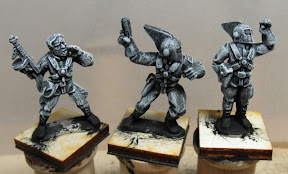 I then painted the jackets in Ceramcoat's 'Autumn Brown'. Coverage isn't great, so it took two coats to even out.

Tomorrow I'll do the pants and boots, then start working on the details if I have the time.
I've decided I want to run a pulp adventure game for Bayou Wars 2011, using the "I Ain't Been Shot, Mum" rules from Too Fat Lardies. I've painted up a test Rocket Corps figure to try out the paint scheme, and now we'll all see if I can paint the other 17 in 7 days.

The figures are well cast and well sculpted, with only a few small bits of flash and one or two figures with a slight mold misalignment. A bit of filing cleaned the worst of it to where it isn't noticeable. The metal is soft enough that it files down quite easily, which is good since I am cutting the wings off of the jet packs to get more of a "Rocketeer" look to them. Some quick work with the Dremel should take care of it quickly.

Today all I did was prime the figures with black Liquitex acrylic gesso. Because primer is boring, I've got some pictures of the test paint for you instead. As always, click for a larger image. 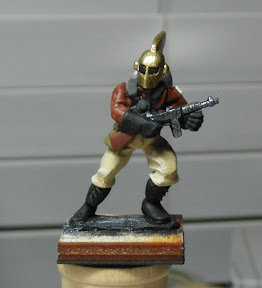 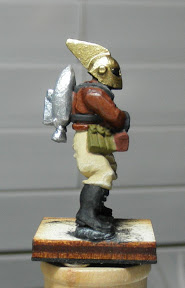 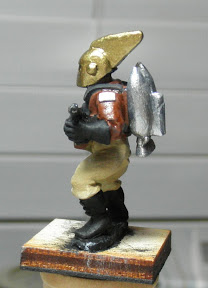 And the right. I am planning to make flag decals for the shoulder patches, which is why it is painted white at the moment. I won't have that done this week, I want to fill up a sheet of decal paper rather than using just one corner of a sheet. 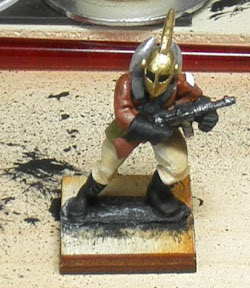 Two squads, plus a few extras, in their lovely black primer.
Browse the Archive »