The past week I've been building another papercraft model, this time a Hummingbird attack skimmer for one of my 15mm scifi forces.

The model is designed to a 25mm (1/60) scale. To build it in 15mm scale, I simply scaled the print to 60% and printed it on photo paper that I cut down to 5.5" x 8.5". After that, I built it like normal. I found that the existing glue tabs did not work well at this size, but cutting off the existing glue tabs and making new ones from colored paper worked out fine. Some pieces ended up a little fiddly and hard to put together, especially the engine thrusters and intakes and the chin gun and sensor pods. 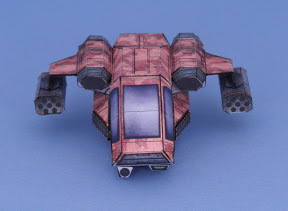 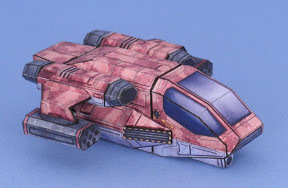 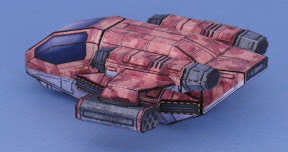 The model is very lightweight. I was going to glue a washer inside the hull to give it some heft, but I forgot. The file includes patterns to make a flying stand, which I'll put together after I find the necessary transparency sheets. I am planning to glue that washer to the bottom of the model, and stick some magnetic sheet to the top of the stand so the model is easily removable.


No in progress shots, but here are the tools I used to cut out and build the model. 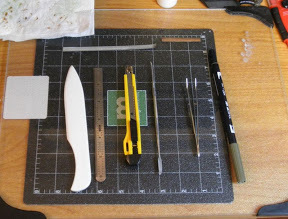 I did my cutting on a glass cutting board. That self-healing mat is under the glass, and I only put it there to give me some contrast for the brown bits of paper I was using for tabs. The white tool is a bone folder, used to crease the cardstock without cutting it. This lets the heavy paper bend much easier and in a more controlled manner; just drag it across a fold line like it is a knife.

The cutting was done with a snap-blade utility knife. Cutting on the glass goes through blades pretty quickly, and these are cheap but still sharp enough to get a good cut. The sculpting tool next to it I used to apply glue, and I used the tweezers to hold fiddly pieces while gluing and to clamp glue joins together until it set. I used the pen (and another brown one) to color exposed paper edges and the backs of pieces so the white bits don't show through.

At the top of the picture you can see leftover paper I used to make glue tabs. I just cut a 1/8" strip of paper, folded it in half lengthwise, and colored one side with a pen. I measured a join edge, cut the paper to length, then cut off the corners as needed so it would fit properly.

I glued it up with regular pva (Elmer's) glue. the blobs at the top right of the cutting board are where I dabbed small drops of glue before using the sculpting tool to apply them to the cardstock.
Browse the Archive »