With the preorder of Five Parsecs from Home 3rd Edition now available, I've decided to start a new campaign using all the new bells and whistles.

The Star of Meli has recently landed on Topher's Reach, a colony world on the fringe of Unity space.  This backwater planet isn't equipped to support starships. The downport at Second Landing consists of little more than a control tower (more like a bunker, actually); plascrete tarmac divided into "bays" with weathered, barely visible paint; and a battered fuel processor supported by a couple equally battered fueling bowsers. Fortunately, the ship isn't damaged.  At least the place doesn't have a crowd of nut-jobs out to kill the crew, like on New Olympus.

At the start of the campaign, the crew has:

The crew doesn't travel (we just got here!). They pay 1 credit to feed the crew, and 12 credits against the ship's debt. 1 credit of interest is added, leaving the crew with 11 credits debt remaining. No repairs or medical care is needed.

Daron goes looking for work for the crew, and finds two job offers.  I'll determine the details of those later.

Gwen, Dashe, and Cryptic go trading. Gwen swaps some unneeded gear from the ship for a couple broken weapons: a ripper sword and a hand gun.  The crew can fix those up later if needed. Dashe finds an army surplus auto rifle. Cryptic finds a local willing to buy weapons but the crew doesn't have any to spare.

Mara and Rego explore Second Landing (apparently First Landing sank into the swamp).  Mara is offered a reward if the crew can retrieve an item, and Rego gets a lead on a local job that will pay well.

With two job offers, one comes from the crew's Sector contact, Jana Roguez.  They have two turns to complete this mission.  The second job comes from a new contact: Ularva Bobora is a wealthy businesswoman who has a job that needs to be completed right  away.  Daron takes both jobs.  The crew will complete Ularva's job this turn and Roguez's job next turn.

“It’s an easy job.  I have a project going up in Mishu province, and someone stole some of my equipment.  The thieves took it to a GDI mining site. I don’t know if GDI is responsible or if they are handing it off to someone else there.

“None of it is very valuable, but my team needs it now and it will take a month to ship in new hardware.  No one else has similar equipment on the planet; that is probably why it was stolen.  GDI’s project manager isn’t talking to me, but that’s no surprise, he’s an ass.

“I want you to recover my equipment.  I know it is still sitting on a truck at the GDI site.  Go in, grab the truck, get out.  Security there is pretty heavy due to some trouble with the locals, so watch yourselves.”

The crew needs to move through the area, exiting two crew members off the far side of the table. Heavy rains recently have left the ground slippery; everyone moves at -1" on any ground that is not elevated. There is a curious item near the center of the table which is worth something if the crew can recover it. 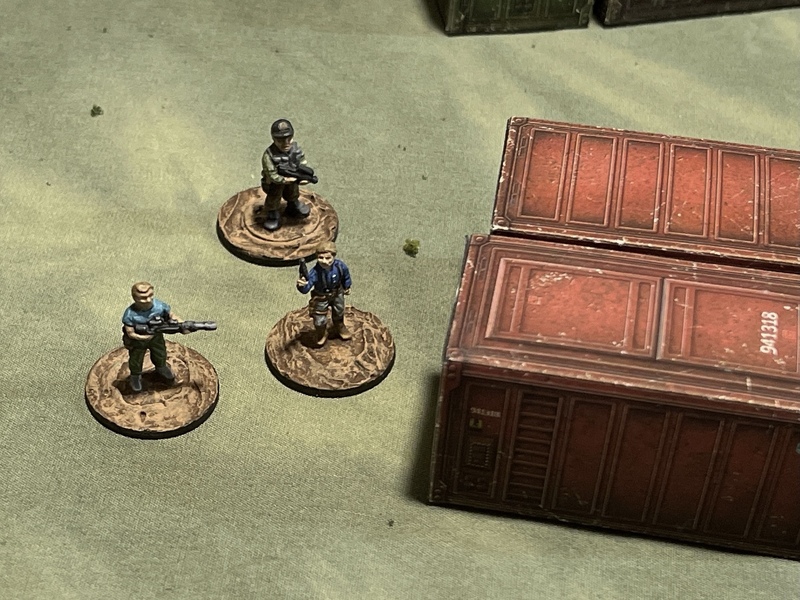 Rego on the left, Daron on the right, and Dashe behind them. 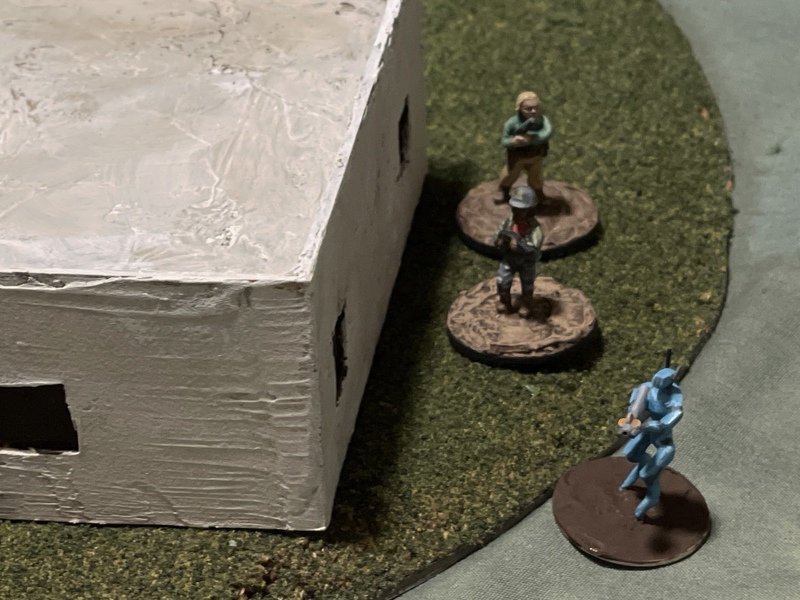 Cryptic Motoko on the right.  Mara then Gwen on the left. 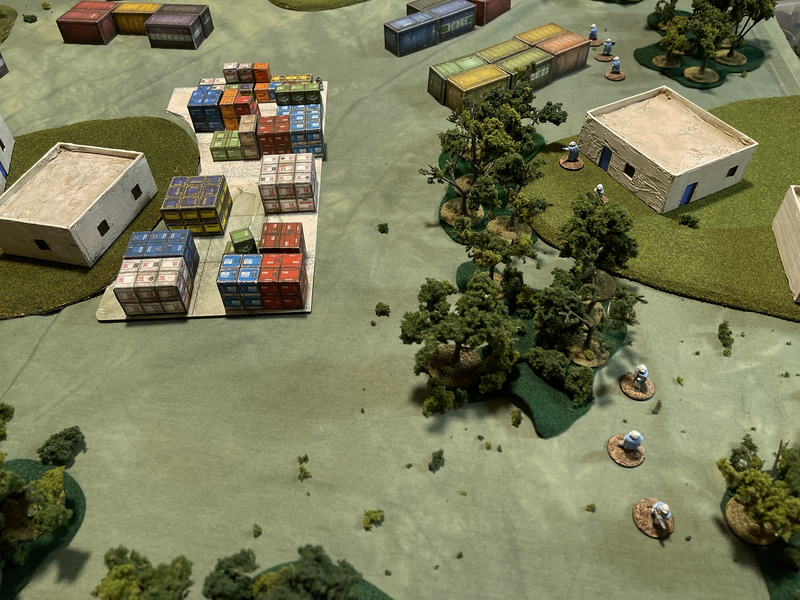 The enemy are corporate security: a lieutenant and five regulars have hand lasers, while two specialists have auto rifles. 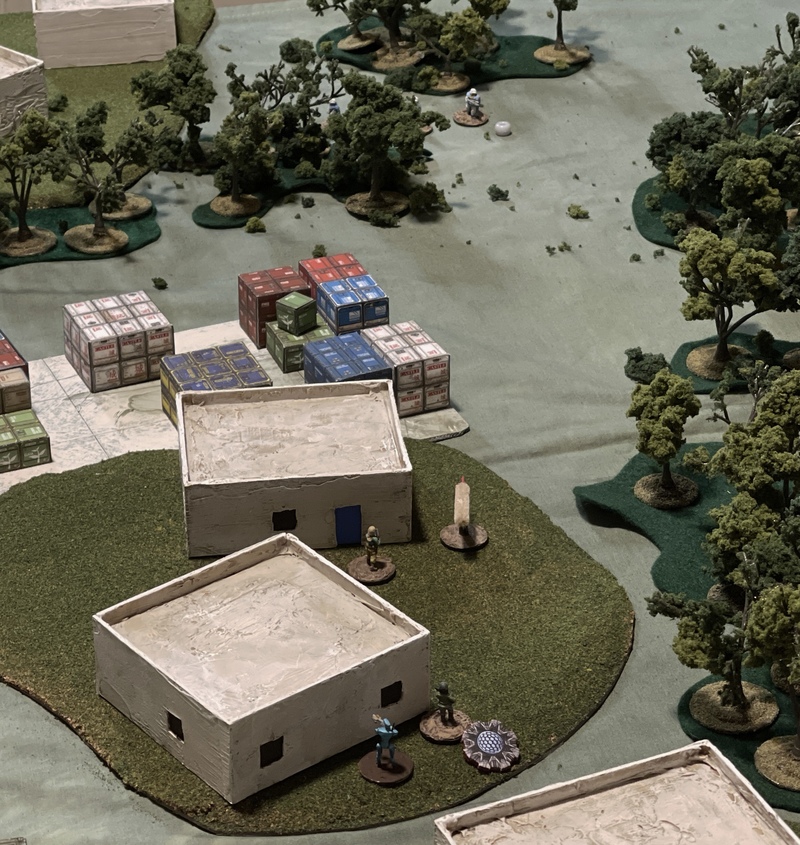 Gwen uses her psionic abilities to put a protective shield around Mara, then moves up.  Mara moves up and fires her autorifle at an autorifle-armed security guard, but she misses. Cryptic follows up behind them.

The security guards all move into cover, but end up without any clear shots.  The hand lasers only have a 12” range, so only their autorifles are useful unless they can draw the crew in. 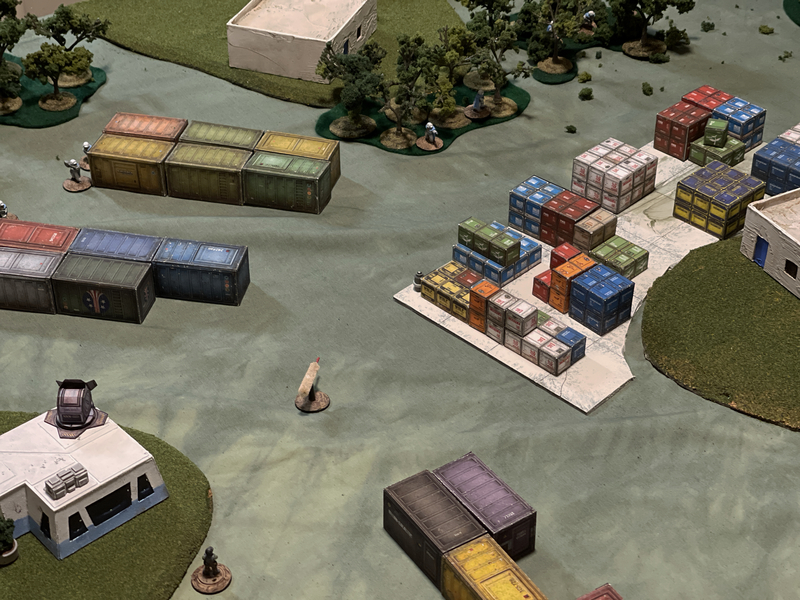 Daron and Rego move up.  Dashe uses his jump belt to bounce forward and fire his autorifle at the guard lieutenant, but he misses. 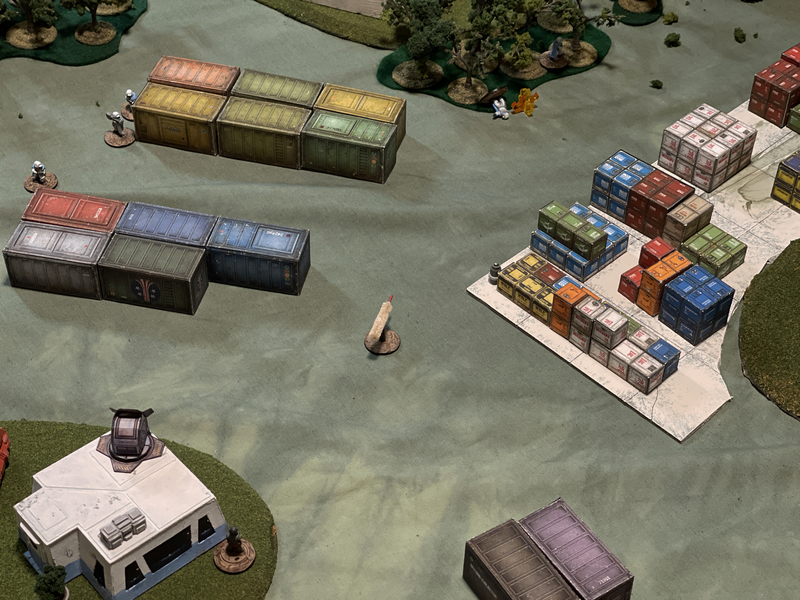 Dashe moves into cover against the building and fires at the lieutenant again.  This time he hits twice and take out the guard. 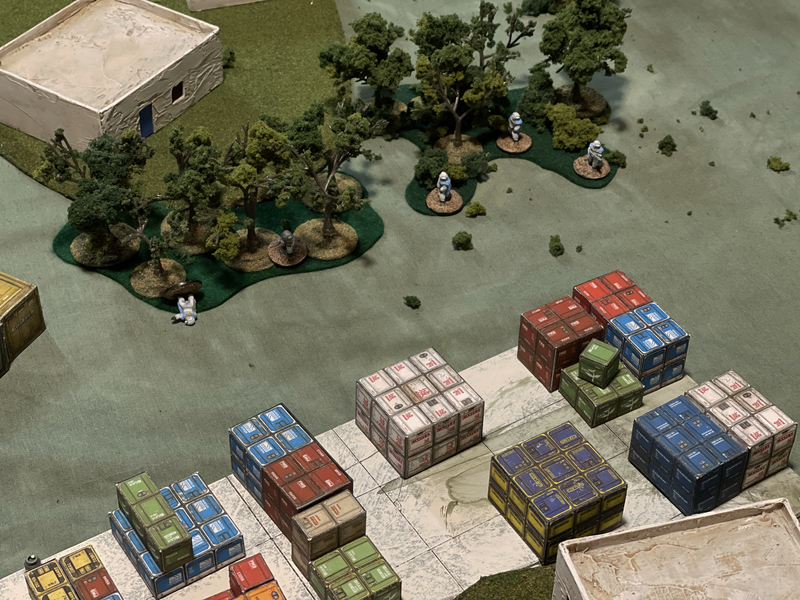 The security guards on the right move into better positions in cover and wait for the crew to get closer. 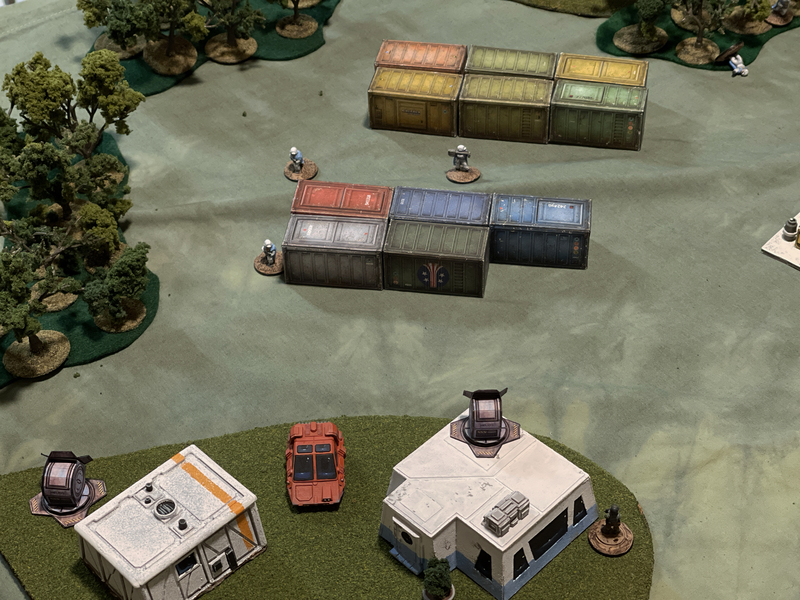 The guards on the left move up among the containers to try to get a shot at the crew.

Daron moves up and Rego holds his position. 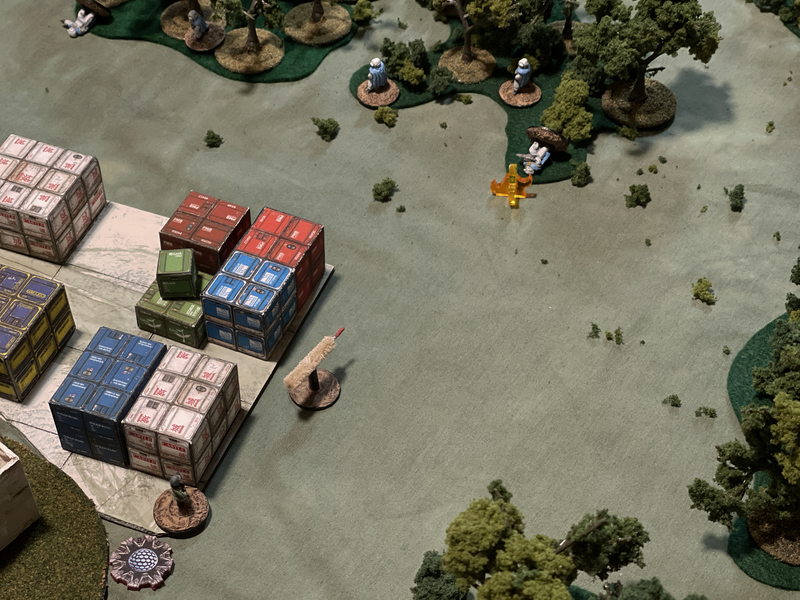 Mara uses her jump belt to reposition and then fires at the guard with the autorifle again.  This time she hits twice and takes him out as Gwen and Cryptic move up behind her.

The guards pass their morale tests. They must think this site is important to just shrug off losing two of their team like that.

I roll an event, Renewed Efforts. One random guard each turn will get an extra action.  They really think this is important. 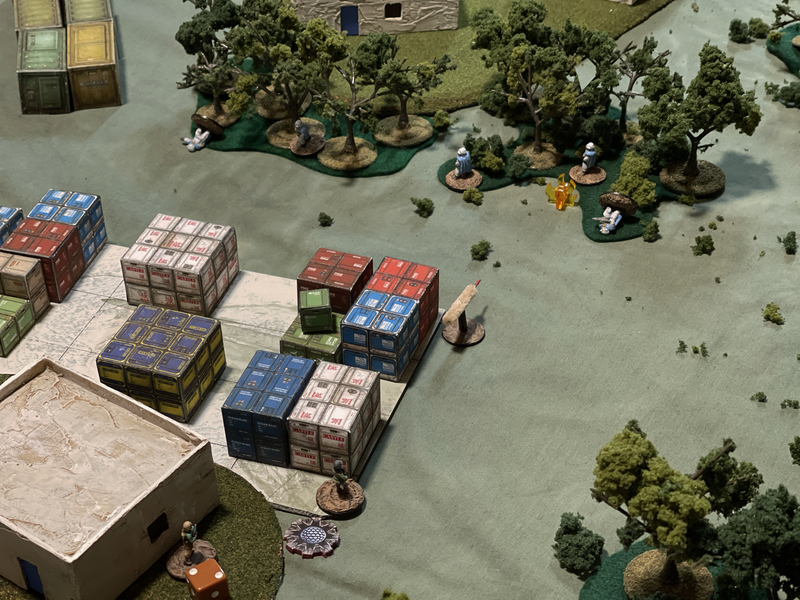 Mara doesn’t move and takes aimed fire at one of the guards, but misses. 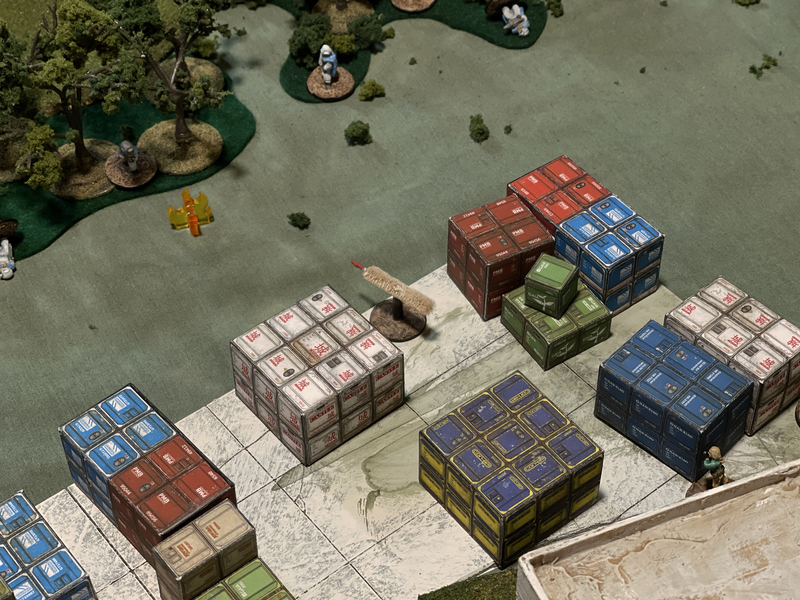 Gwen moves up and fires her handgun at a guard, and also misses. 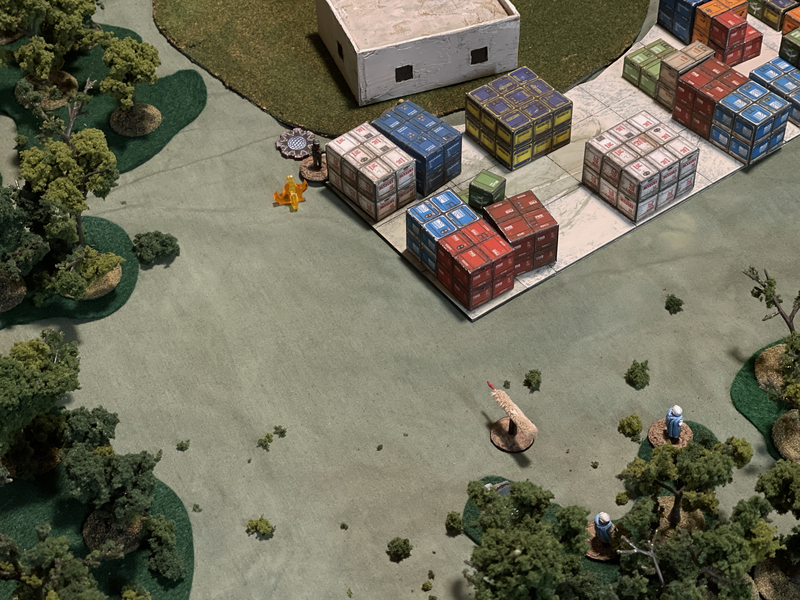 A guard fires his hand laser at Mara and hits, but Gwen’s protective barrier deflects the shot. Two guards fire at Gwen but both miss. 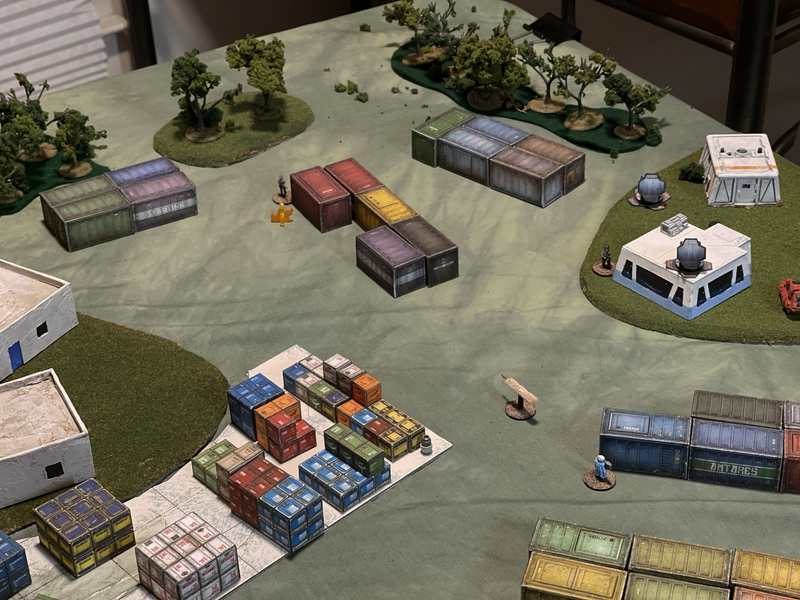 The second guard with an autorifle shoots at Rego.  He dives down at the last moment, barely avoiding the shots as he uses his only point of Luck.

The other two guards move, and one gets a bonus move.  Everyone is slogging through the mud, so nobody gets anywhere quickly. 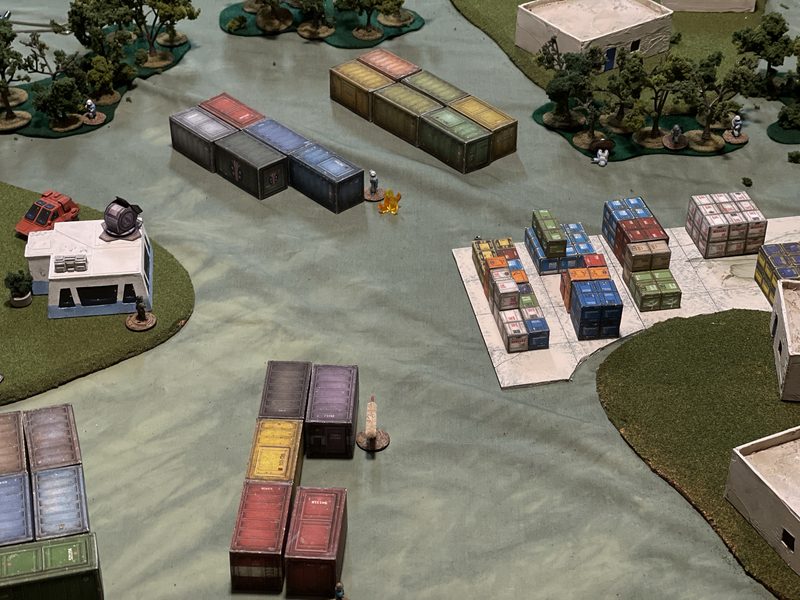 Rego returns fire at the guard, but misses. 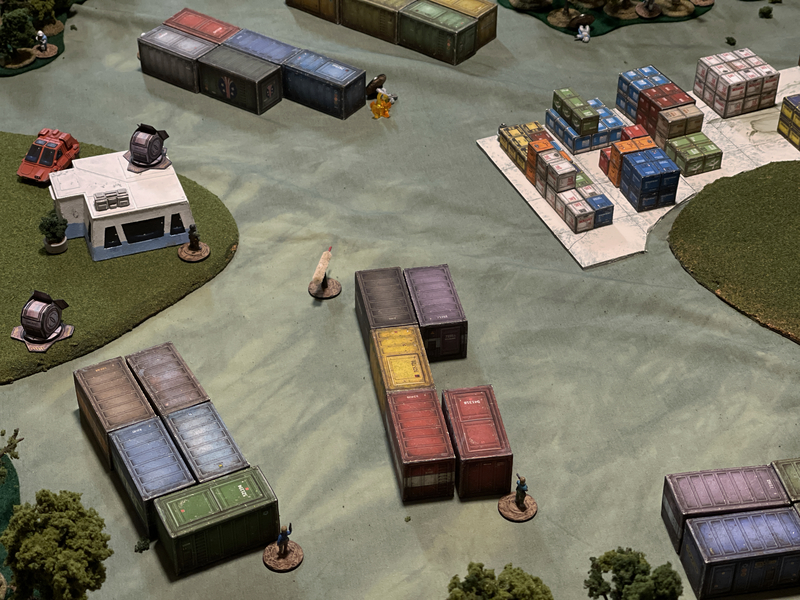 Daron moves up and fires at a guard with his rifle, taking him out of the fight.

Dashe carefully fires at another guard and misses.  Cryptic moves up again.

A guard fires at Mara but misses.  Another moves up, the rest hold position in cover.

Mara aims at a guard and stuns him. 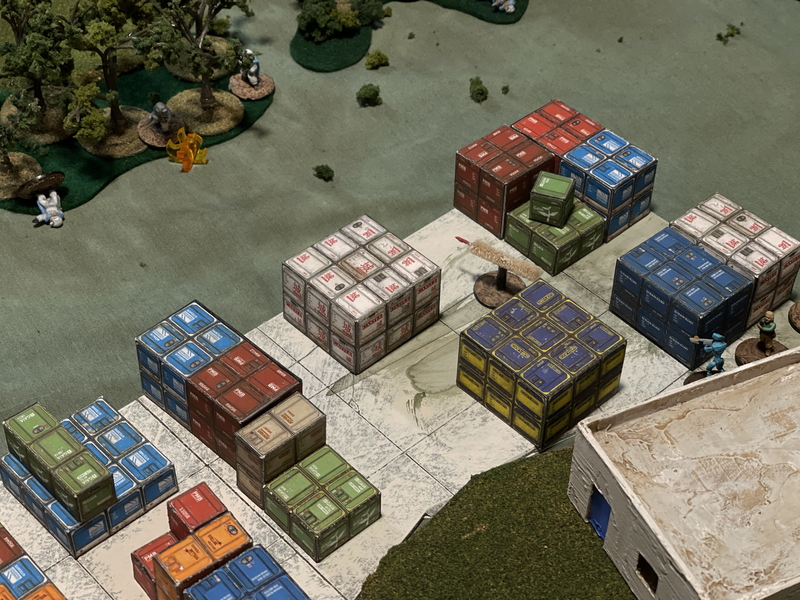 Cryptic fires at another and stuns him.

Rego and Daron move up. 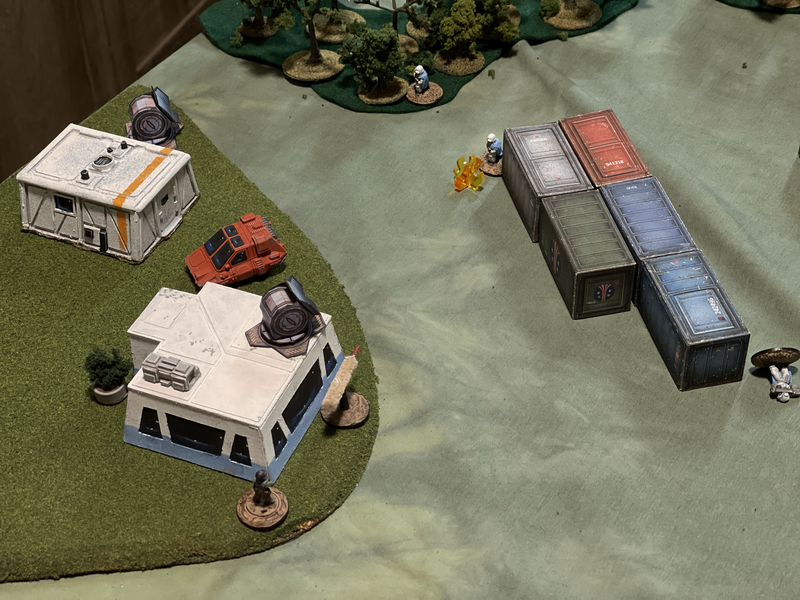 Dashe moves and fires at a guard, taking him out.

Again, none of the guards bail from the fight.

Turn 4 event, Clock is Running Out.  There’s gunfire and a massive explosion on the far side of the facility.  Is someone else attacking the site too? 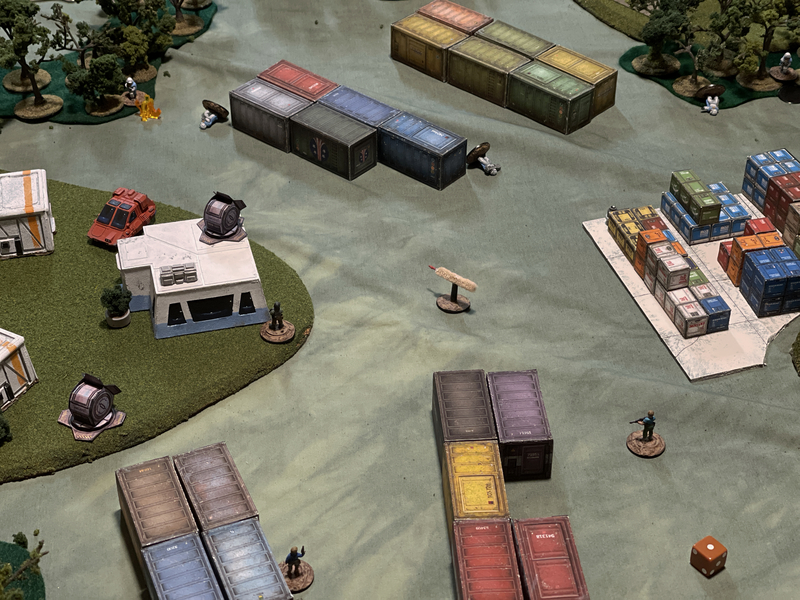 Rego moves and fires at a guard, missing. 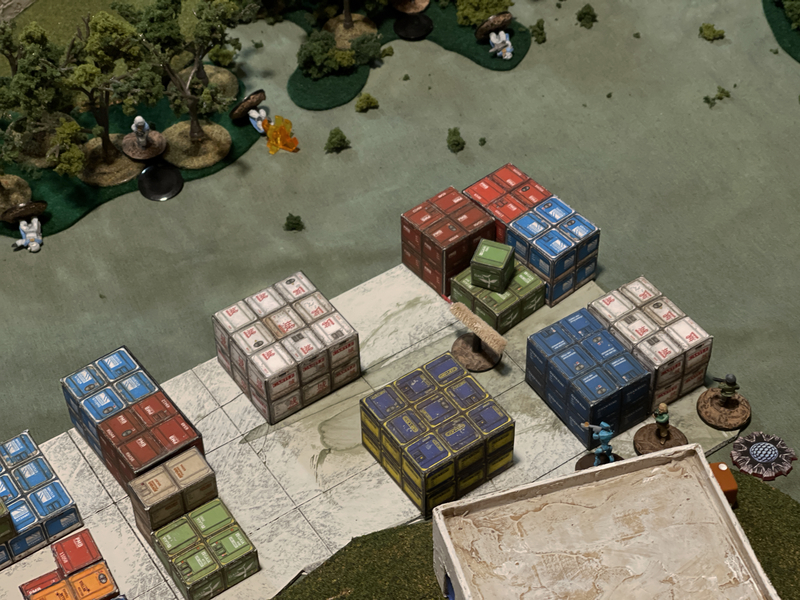 Cryptic aims at a guard with his hunting rifle, taking him out.

With no target to fire at, Gwen holds her position. 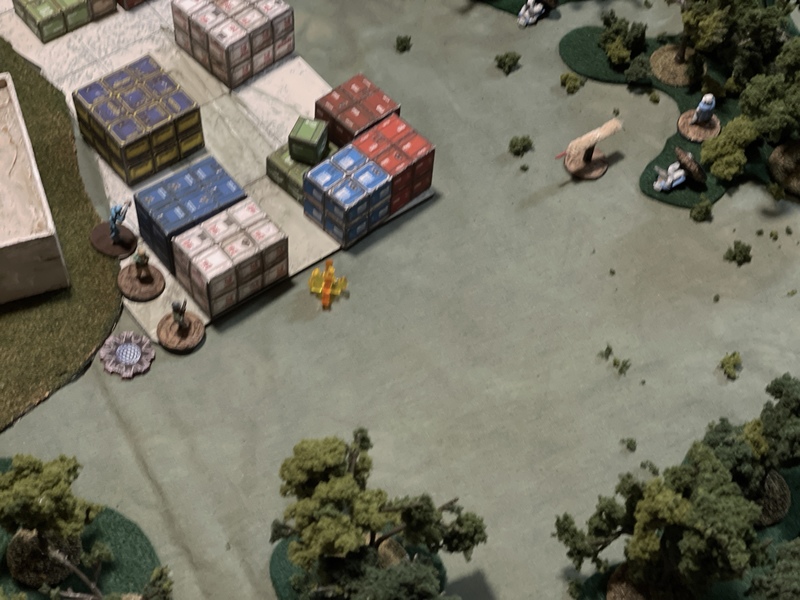 The guards move up.  One uses the bonus action to fire at Mara, but misses. 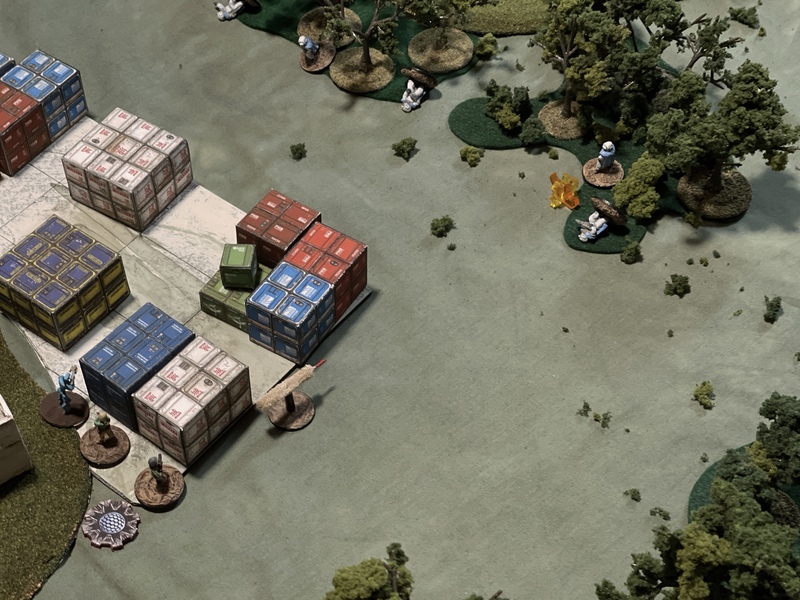 Mara aims at a regular and stuns him.

Dashe aims at another and stuns him.

The guards’ morale is holding firm. They are holding here no matter what.

I roll for the clock, and get a 6.  The crew sees their target air-truck lift from the mining site and fly away to the north.  They pull back and get out of the fight before anything else goes wrong.

The corporate security did not become a new Rival; they were too busy dealing with the rest of the mess at the site.  As we failed our mission, Ms. Bobora is not added to the crew’s list of Patrons.
The crew is paid 6 credits for attempting the mission. Each of them receives 2 xp, and Dashe gets another for inflicting the first casualty.
The campaign event has the crew chilling out in the ship’s galley, giving them another story point.
The character event results in Gwen making some friends, +1 xp and she gets a health boost implant for cheap (this is actually the loot roll result).