The crew has been hired to pick up a contact at Tinsey Outpost and bring her back to the client. But on the way to the outpost, the journey was interrupted. Bullets tore into the front of the old float truck, disabling the engine in a plume of smoke and coolant. The truck dropped on its collapsing air cushion, hitting the ground with a shriek of tortured metal and composites. The crew bailed out, looking for cover as more fire whistled past overhead. Down the track, vigilantes were waiting for them. 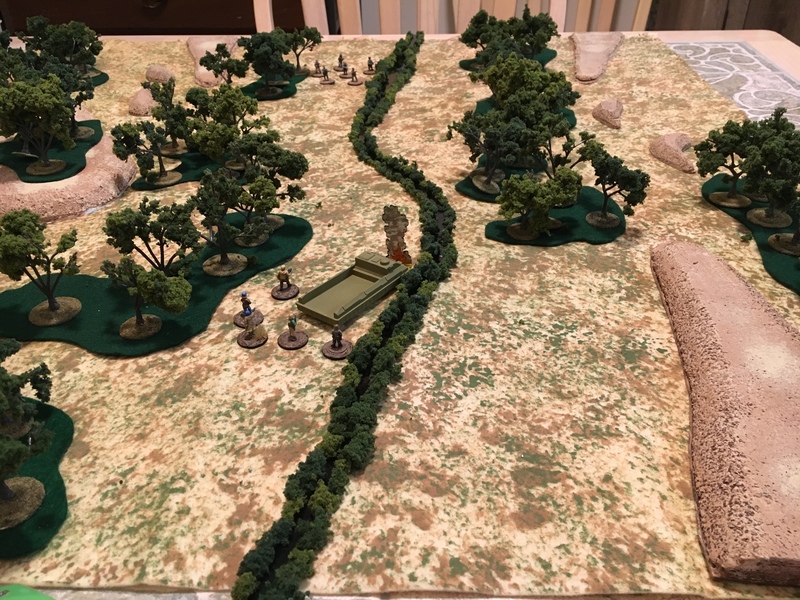 “Richy!” one of them called out. “We’re here to bring you back to see justice. You can come quietly, or not, but you’re coming with us.”

“Watts, is that you?” Reda called back.  “Your boy started that fight, he got what he deserved. You can go to hell if you think I’m just giving myself up.”

“It’s your funeral, woman.” With that and a gesture from Watts, the vigilantes split up and move to attack the crew. Watts takes two of her crew across the stream to flank them, while her lieutenant takes the other two into the woods. 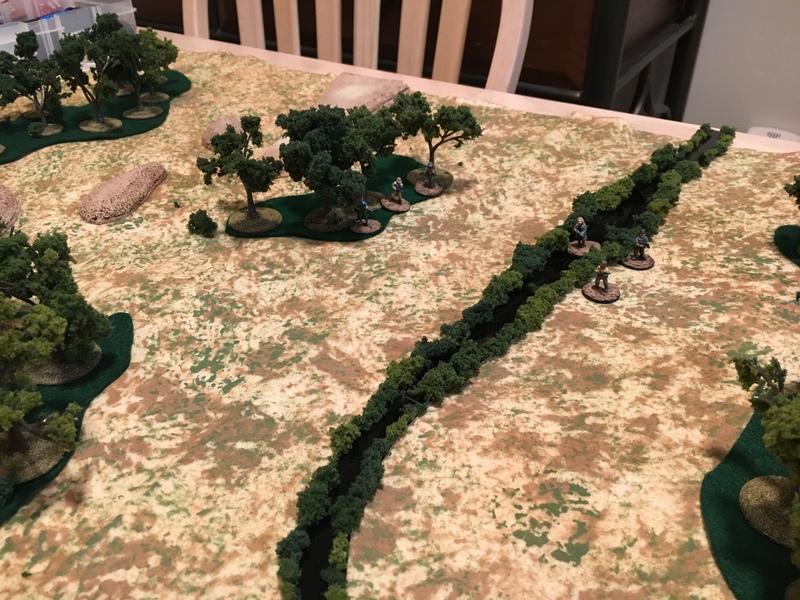 Yared moves into the tree line and fires his rattle gun at the men in the woods, but misses with the heavy weapon.  Diana jumps into the back of the truck, using the cab as cover while she aims her rifle at the vigilante with an autorifle.  Her shot cracks into a tree next to his head, forcing him to duck back and stunning him (marked by the blue ring next to his base). 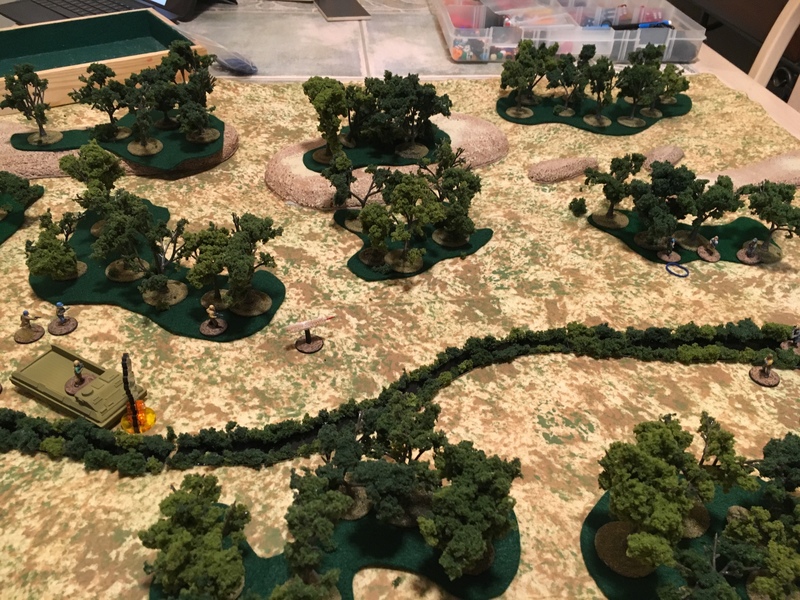 Tine moves up into the woods behind Yared, while Reda and Jase cross the stream as well.

On turn 2, Yared activates before the vigilantes.  Yared fires another burst at the autorifle-carrying vigilante, driving him further back in the woods and stunning him again.

The vigilante boss moves up with her team, but none of them have a shot at Reda or Jase.  The autorifle guy shakes off one of the stun and moves up to the edge of the woods so he can shoot next turn.  Meanwhile, the LT and rifleman take shots at Diana, missing her. 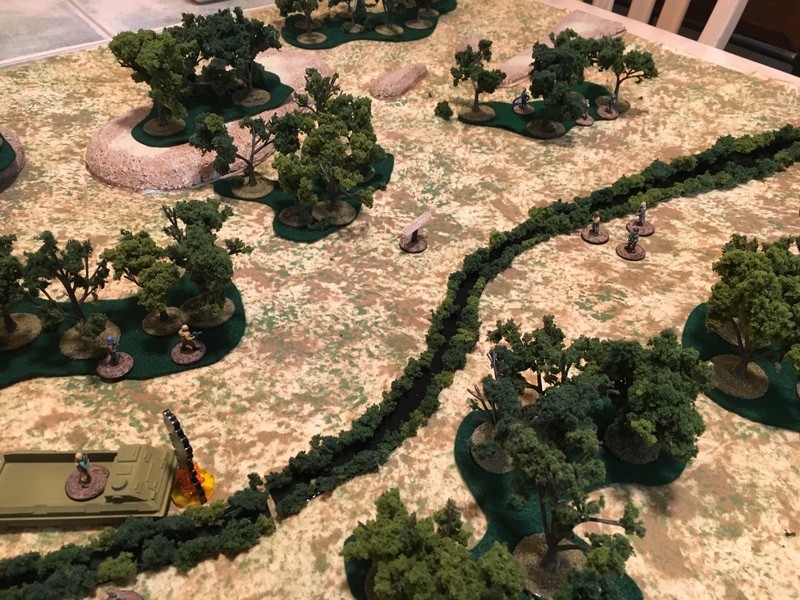 Diana fires back at the autorifle man and hits him squarely, knocking him out of the fight. 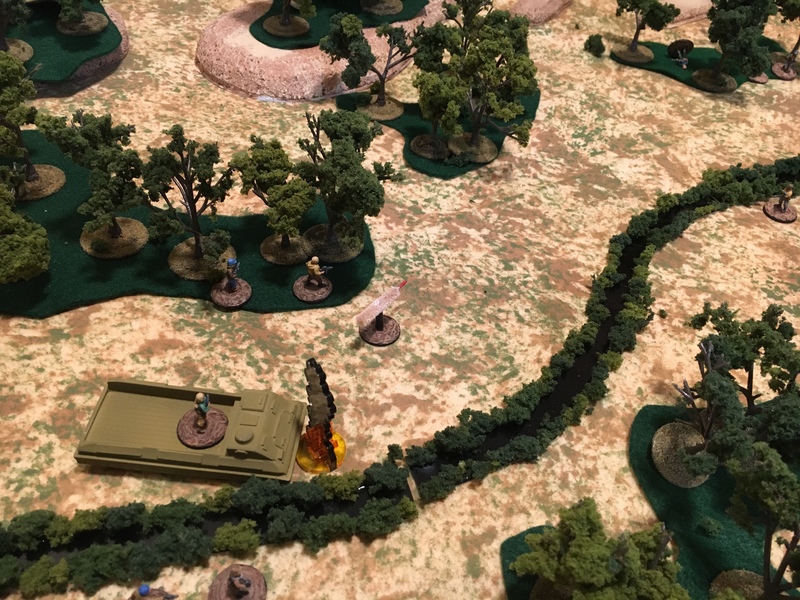 Tine moves up in the woods, but doesn’t have a clear shot.  Reda moves up and shoots at one of Watts’ men, and misses.  Jase moves up into the woods next to Reda. 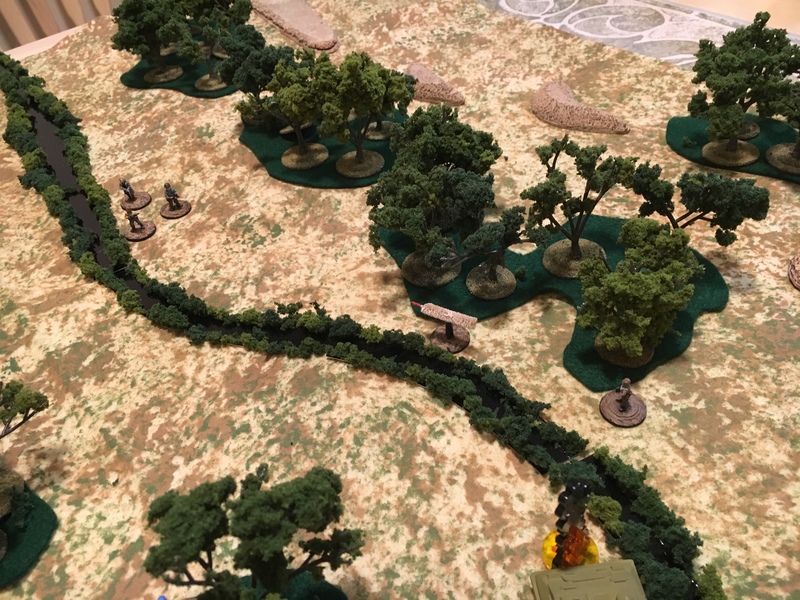 In turn 3, there was a lot of shooting but nobody hit anything.  Everyone except Yared needs to roll a 6 to hit a target in cover, and they just couldn’t do it.  Watts’ team moved forward, and Jase moved up to the edge of the woods. 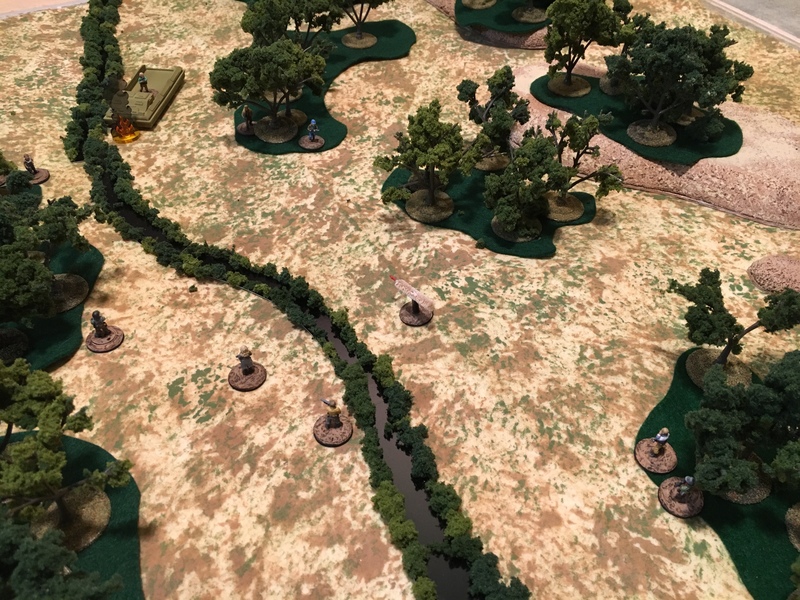 In turn 4, none of the crew can activate before the vigilantes.  One of them shoots Jase, winging him and forcing him back into cover (stunned).  The rest of Watts’ team on the right advances and shoots at Reda, but misses.  The LT’s team also moves up and shoots at Yared and Tine, missing.  Yared, Reda, and Tine fire at Watts, but miss. Diana fires at the LT, but misses her shot as well. Jase recovers from being stunned. 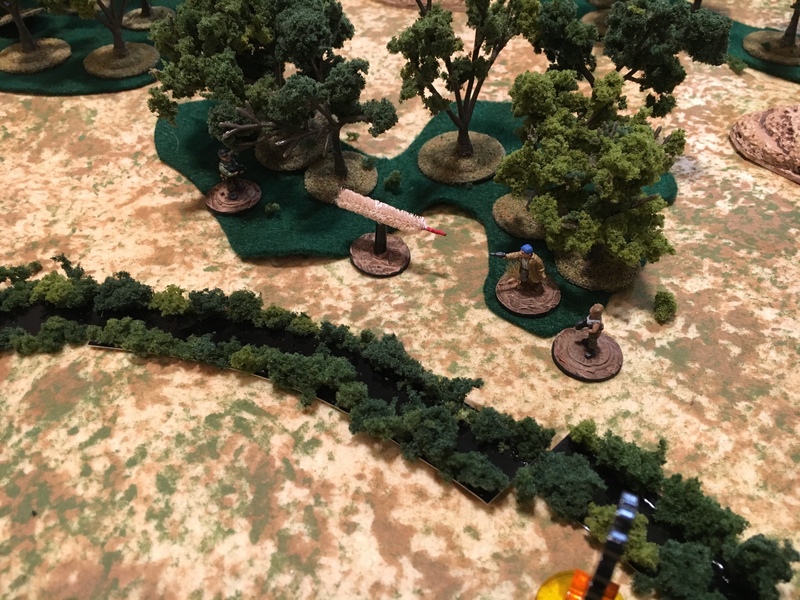 In turn 5, initiative went well.  Jase, Reda, and Yared all can act before the vigilantes.  Reda shoots Watts, hitting her square and knocking her out of the fight.  (The dice are there to show who gets to act immediately.) 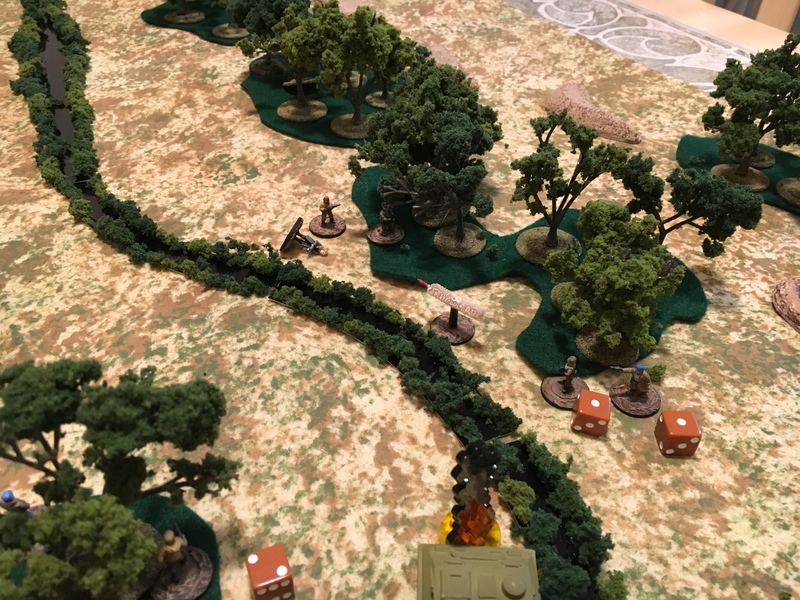 Jase moves up into the woods and shoots at the vigilante across from him, but misses.  Yared fires at the LT and stuns him. 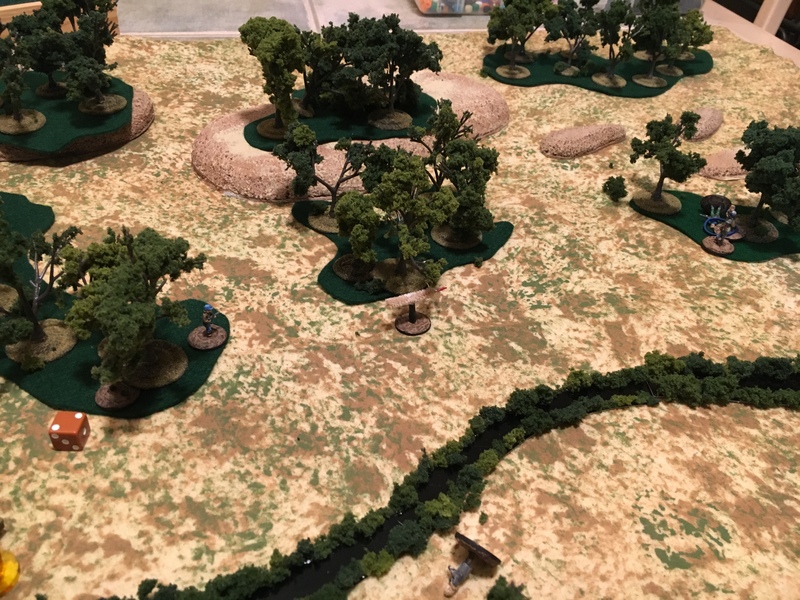 The vigilantes return fire, but miss.  Tine and Diana shoot and miss.

In turn 6, Yared gets the initiative.  He turns to fire his rattlegun across the stream at the remaining two vigilantes there.  He hits them both, knocking both out of the fight. 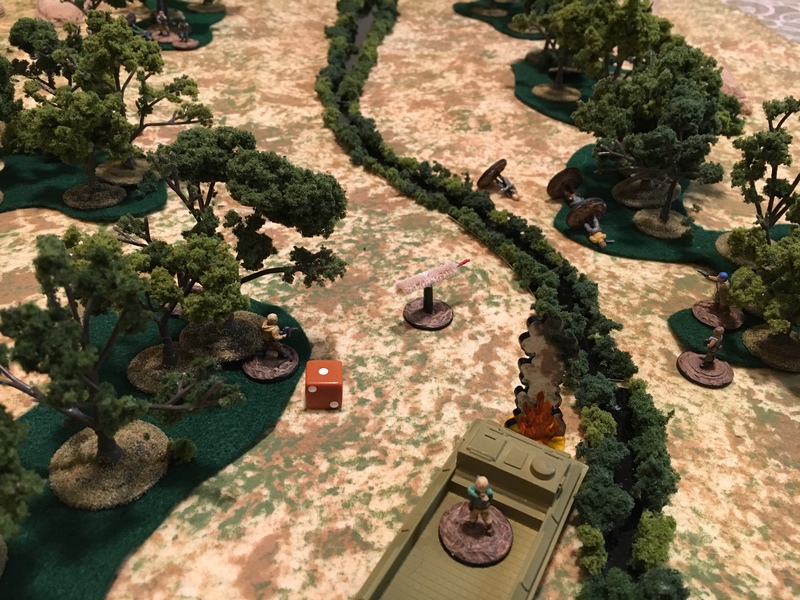 The LT and his remaining teammate fire at Tine.  The rifleman stuns her.  Tine and Diana shoot at the LT and miss, while Reda and Jase move up along the stream.

Turn 7, and things are looking very bad for the vigilantes.  But they have yet to fail a morale test (taken every time someone is knocked out).  They’re in it for the duration.

Yared and Tine get initiative and fire.  Yared stuns the LT again, but Tine misses.  The rifleman shoots at Tine and misses while the LT shrugs off the stun.  Diana fires at the rifleman, missing.  Reda moves up and shoots at him as well, stunning him.  Jase just moves up so he can fire next turn. 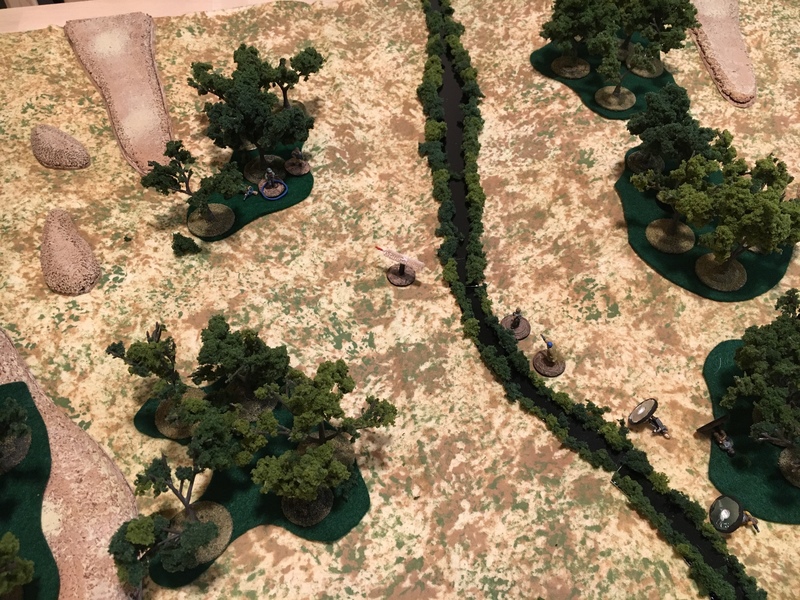 In turn 8, Yared hits the rifleman, stunning him again.  He and the LT shoot at Reda but miss.  The rest of the crew fires back, missing.

Yared gets initiative again in turn 9 (he has a higher Reaction score than the others and the only weapon with multiple shots, so he almost always gets the initiative when it’s available).  He hits the LT, knocking him down.  The last rifleman shoots at Jase but misses.  The rest of the crew shoot at him,  and miss. 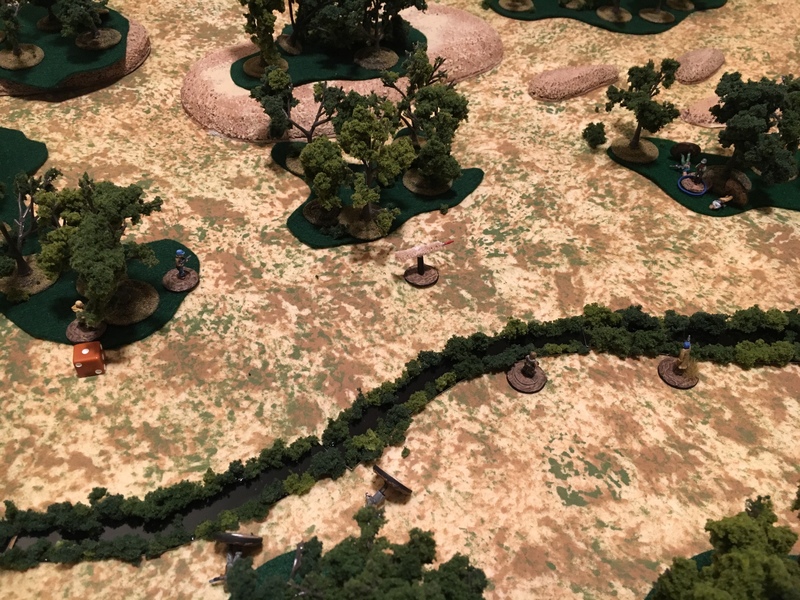 Turn 10 sees Yared fire first, missing. The rifleman fires at Jase and misses. The rest of the crew fires back. Diana hits him and knocks him down, ending the fight.

Reda looked down at Watts, bleeding on the ground from the hole in her leg. “Dammit Watts, I didn’t want any of this. I told you, Jake started that fight. I was defending myself. I didn’t want to kill him, it just happened.” She pulled off her belt and tightened it around the wounded leg, slowing the flow of blood.  “I don’t want to kill you, either.  We’ll get you back to town to get this taken care of.  If you’re lucky, you won’t lose the leg.”

After the fight, I determined that the rivalry between the crew and Watts’ vigilantes is over.  I rolled for the vigilantes’ wounds just to see what happened.  Watts has a permanent wound, the LT and one of the riflemen is dead, and the others have minor injuries.  They also found a Strange Artifact on one of the men.  I don’t know what it is, but they can spend some cash and time in the next campaign turn to find out.

Everyone got 3 xp for winning the fight and not getting injured.  Diana got an extra xp for getting the first knock-out, and Reda gets an extra for taking out Watts.

We did some shopping, and found a stim-pack (use to ignore a knock-out), a displacer (one-shot teleporter) and a stabilizer (ignore the penalties of a Heavy weapon; Yared will put this on his rattlegun).  We ran into a friendly doc (obviously whoever we helped Watts get to) but didn’t need their help.  Jase made some local friends, which netted him another xp.