Well, it’s been a while since I’ve played one of these, or much of anything else either.  It’s the usual reasons, and I won’t go into them here.


The crew remains on New Olympus to track down more information about what is going on.  The crew used the Basic Supplies Jase picked up last turn rather than paying for upkeep.  No medical care is needed.  Tine spent 3 credits to examine the strange artifact, and discovered it is a Grav Flinger.  This strange device pushes people and objects away from the user when it is triggered.

Jase, Reda, and Yared go trading.  Jase picks up a stim pack, Reda gets a luxury trinket, and Yared finds some basic supplies. Diana and Britt go exploring; they find a local gambling den and drop in.  One of the locals was blatantly cheating, and when Diana called him out on it, things got ugly.  She lost her concealed blade and Britt lost his dazzle grenade.

We were intercepted by one of our rivals, the Crimson Vipers gang.  They have four gangers with rifles, a specialist with a hunting rifle, and a lieutenant with a rifle.  The gang boss, Drake, is leading the group, and carries a hand cannon and brutal melee weapon.  I rolled a deployment condition, “surprise encounter”.  So my crew got the drop on the gangers.  There is no notable site.  As these gangers are criminals, I rolled for a bounty.  I’ll get 3 credits extra if I win the fight.

Without better leads on Jase’s family’s killer, the crew heads to one of the freight yards at the Serenity Docks.  They have been asked to pick up some equipment at the yard and transport it to a remote mining site on the south continent.

The docks are “protected” by a local gang calling itself the Crimson Vipers.  They have been trying to shake the crew down for protection money, but Jase has been stonewalling them.  They have gotten tired of waiting, tracked the crew down, and are going to take that down payment by force.  Fortunately the crew was expecting them and ready for the attack. 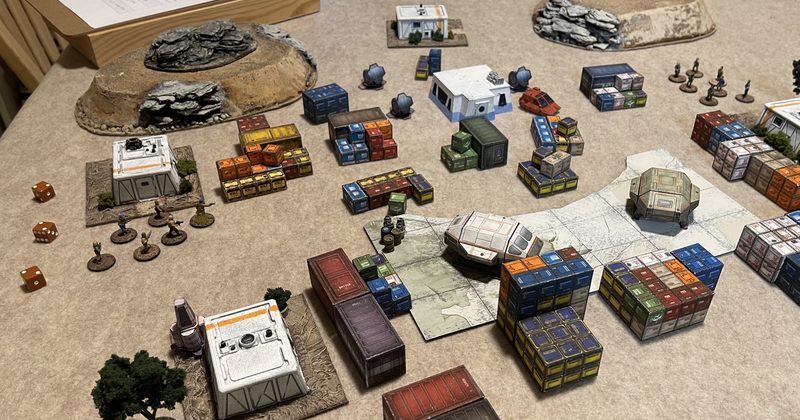 Turn 1. The crew enters from the left, while the Vipers enter from the right.  The crew can’t manage to get line of sight, so they move toward positions they can fight from.  The gang is surprised; obviously they weren’t expecting the crew to be here so soon.  Drake calls out, “Hey, Captain, all you gotta do is pay me my money and we’re square. This doesn’t have to get rough.” 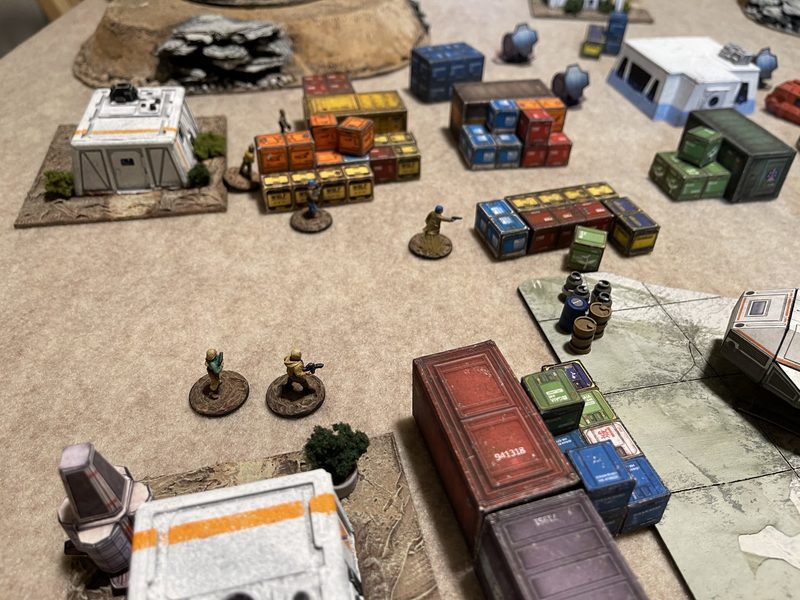 Turn 2.  Tine moves forward and takes a shot. She wings one of the gangers, knocking him out of the fight. 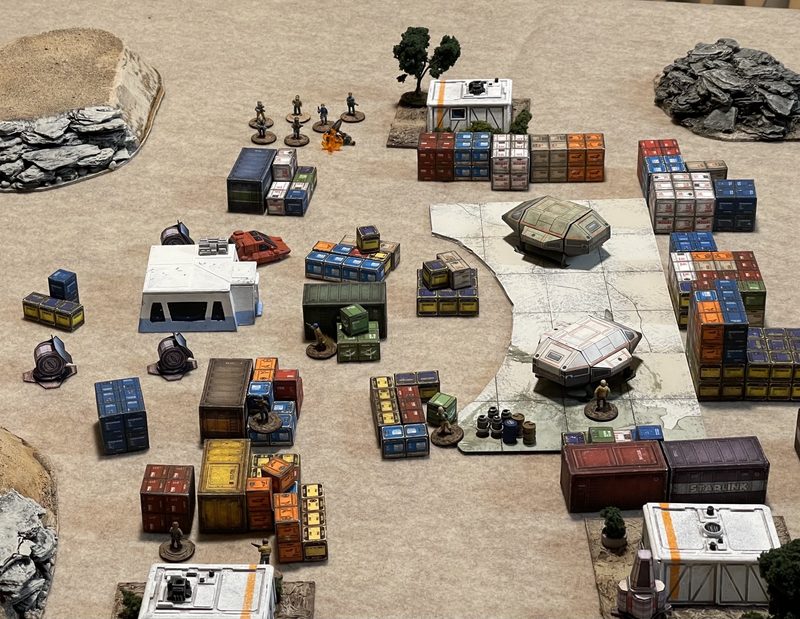 Jase, Yared, and Diana all move into covered positions.  “Go kill those bastards”, Drake orders.   One of the gangers takes cover behind some crates and fires back at Tine, missing. The rest move to take cover behind the crates.  The specialist with the hunting rifle goes left behind some containers, hoping to set up a crossfire. Jase yells out, “You know you aren’t getting any credits from us, just get out of here and nobody else will get hurt.” 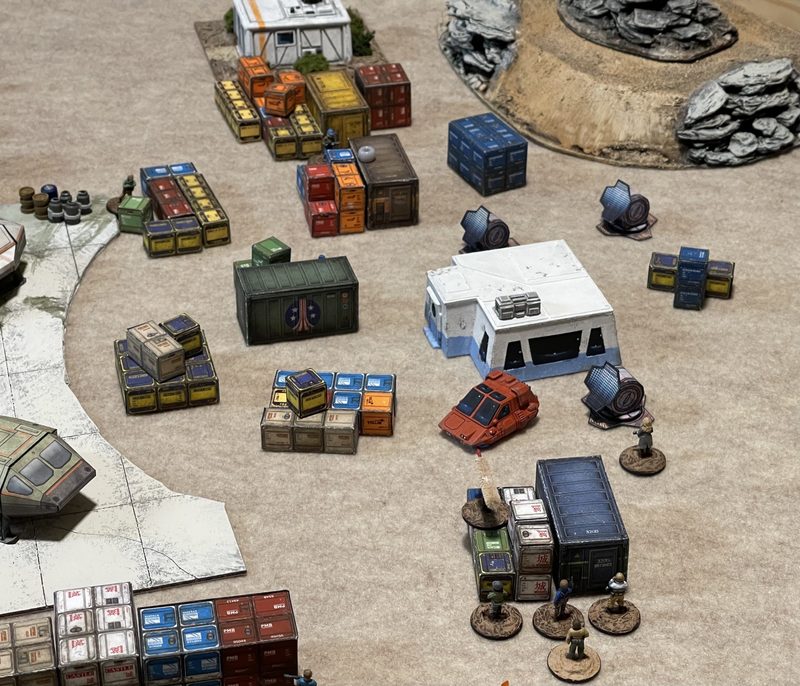 “Britt, this way,” Reda says quietly. The two of them circle left, staying behind the crates for now.

Turn 3. Yared moves and fires a burst from his rattlegun, taking down another ganger. 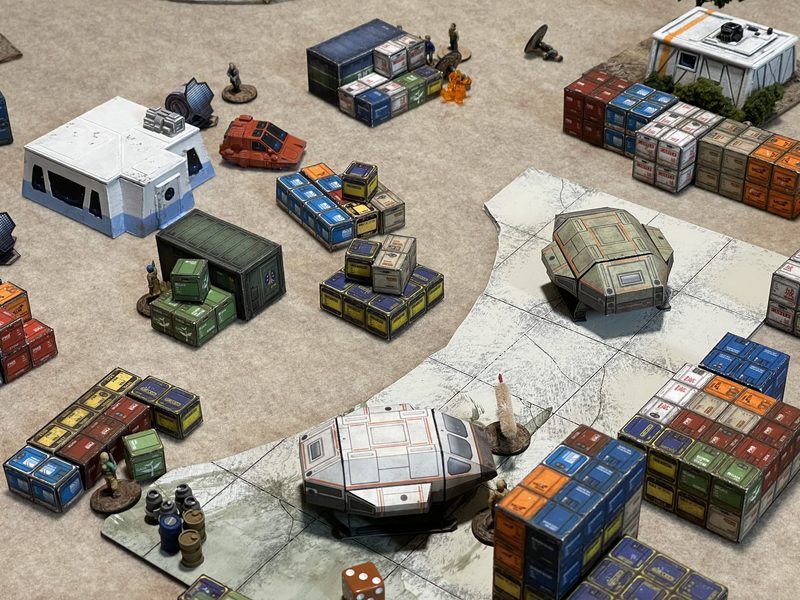 The gang lieutenant moves up and takes a shot at Tine, and misses. 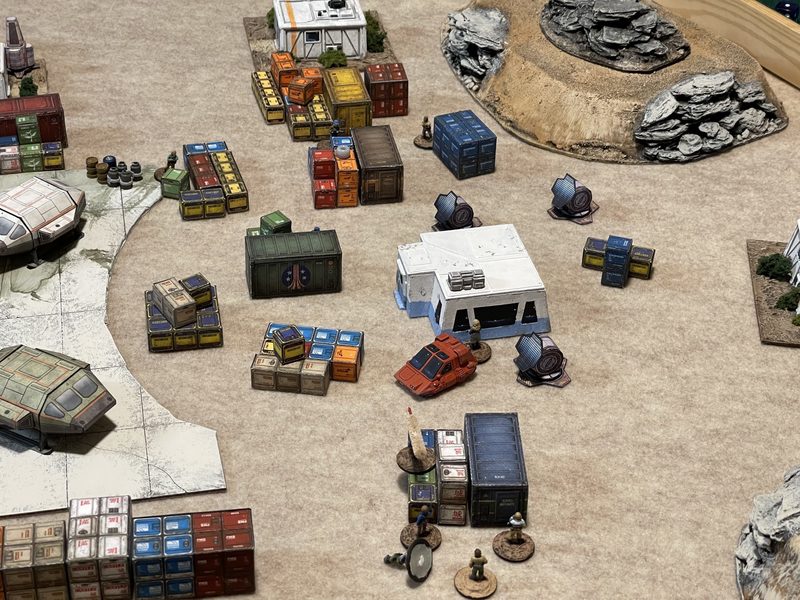 The other gangers rush forward trying to find cover to shoot from.

Tine takes a shot at the lieutenant and misses. 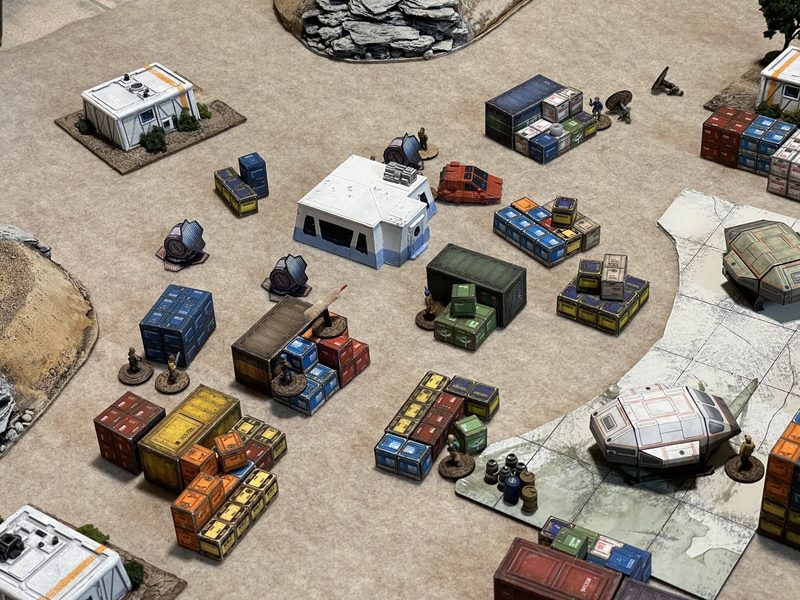 Reda takes cover behind a solar collector and takes down another ganger. 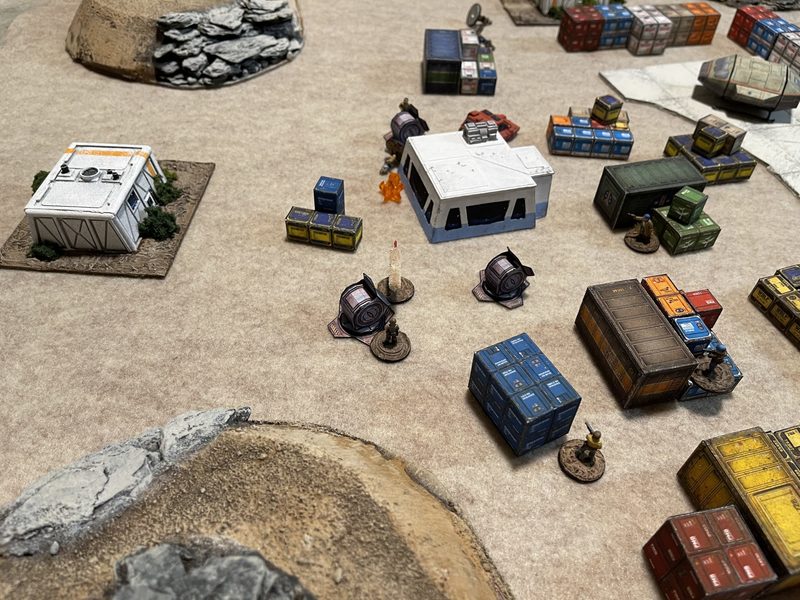 Britt moves up to the corner of the building.  Jase leans around the corner of a container and misses the ganger next to the car.  Diane (by the crates bottom left of the picture) moves up next to Jase. 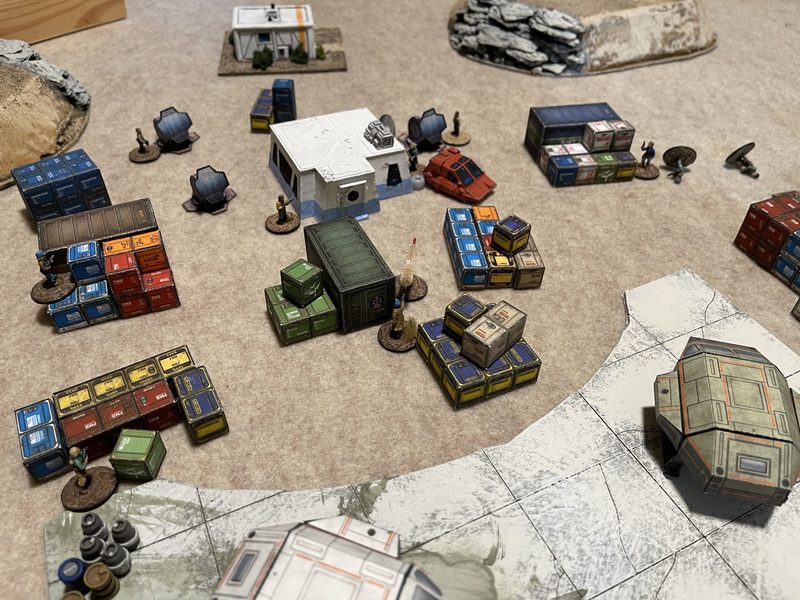 Turn 4.  Yared sees the guy with the hunting rifle taking aim at him.  But Yared fires first; his rattle gun tears into the ganger and knocks him out of the fight. 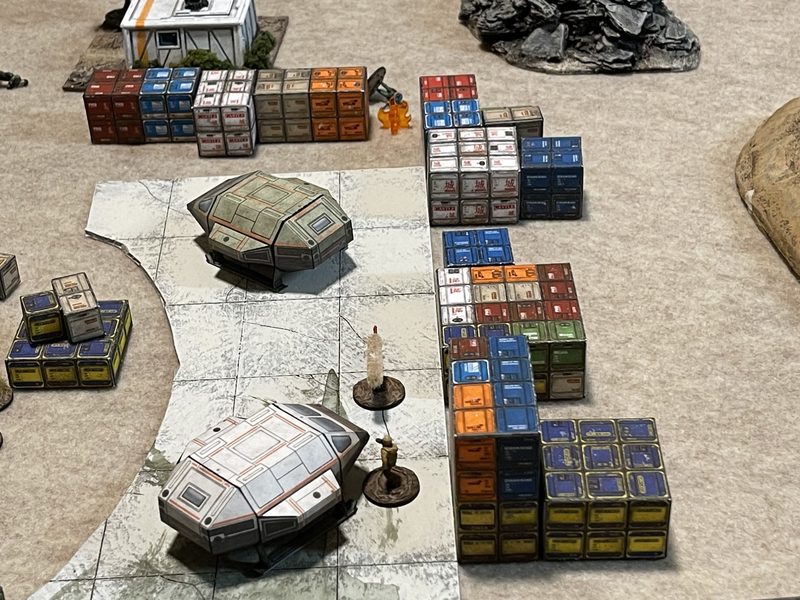 Tine fires at the lieutenant and misses again.  Drake and one of his minions both shoot at Jase, both missing.  The lieutenant moves up and into better cover.

Jase shoots at Drake, stunning him. 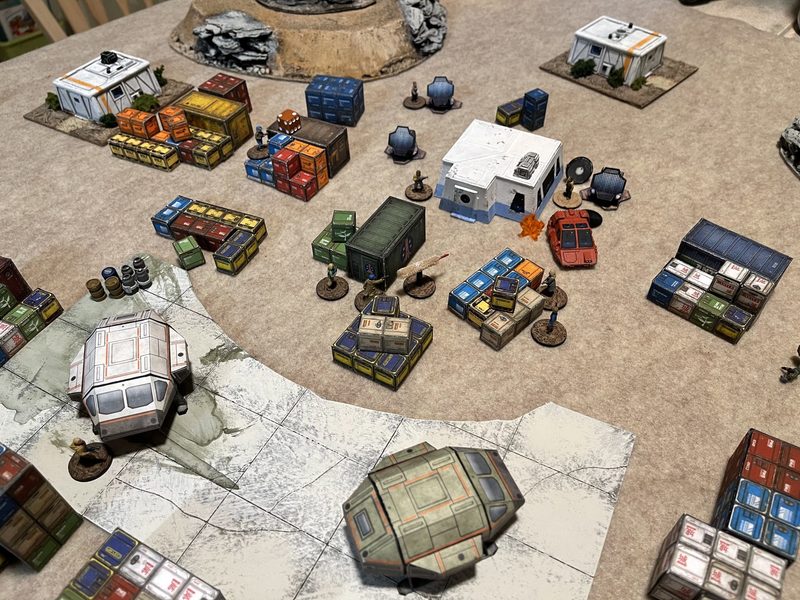 Britt shoots at a ganger, taking him out of the fight. 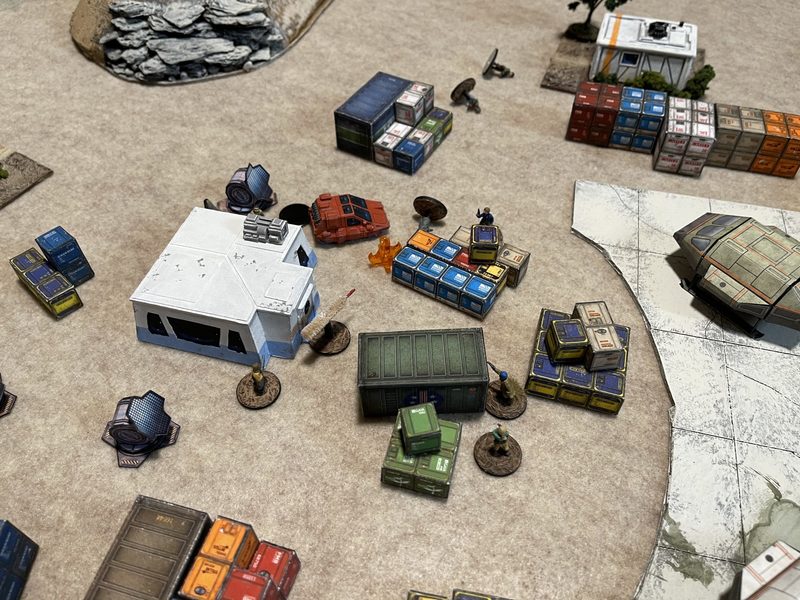 Diane shoots at Drake too, stunning him again. 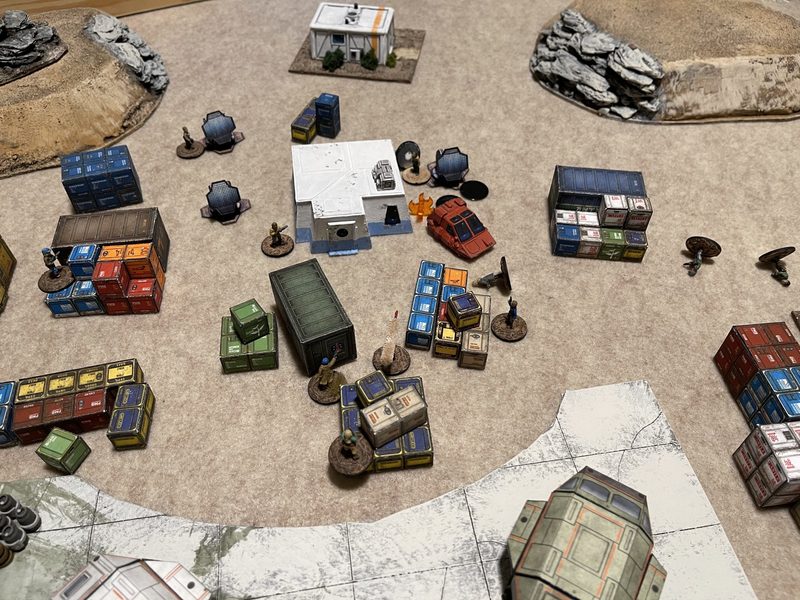 The two stuns pushed Drake back into Reda’s line of fire.  She takes her shot and misses. 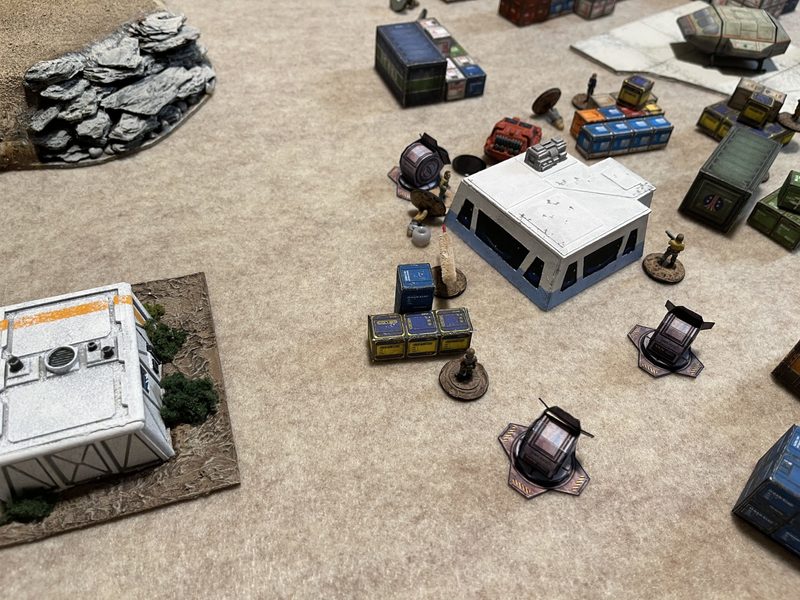 Turn 5, and things are looking bad for the gangers.  But Drake wont back down, and his lieutenant is more afraid of him than the crew, so they keep fighting. 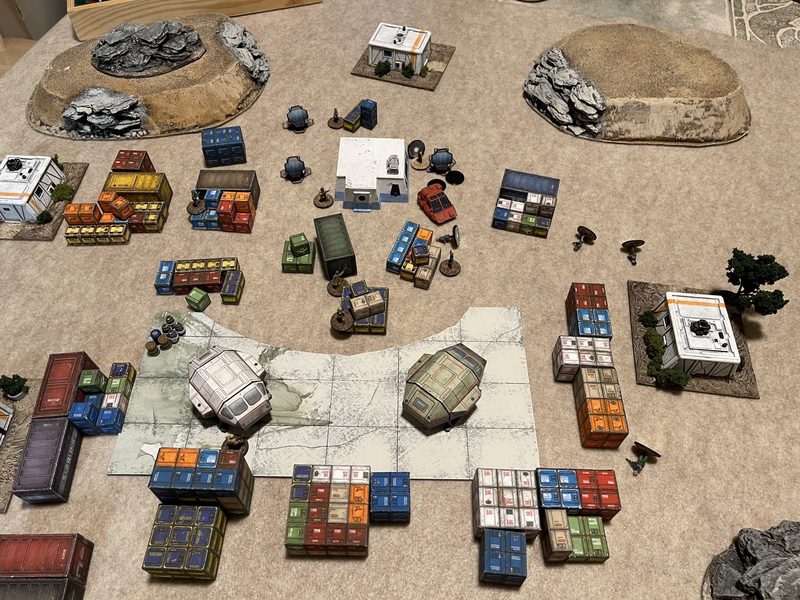 Britt takes a shot at the lieutenant, but misses. 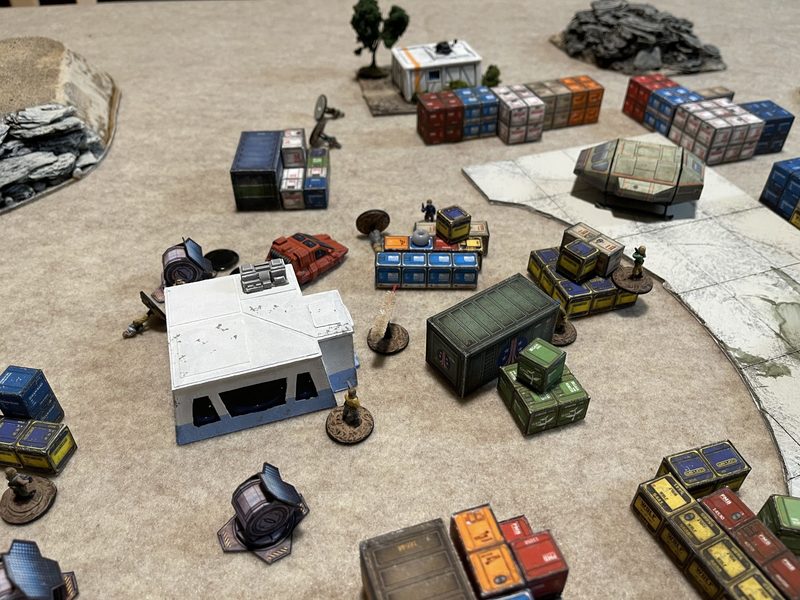 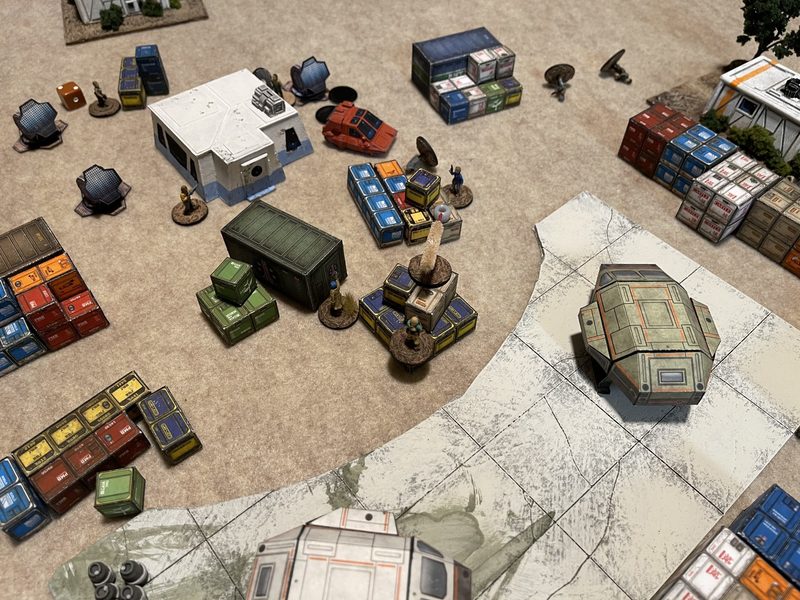 Britt trusts in Bessie, moves to clear his line of fire, and opens up on the lieutenant.  His shots hit, taking the ganger out. 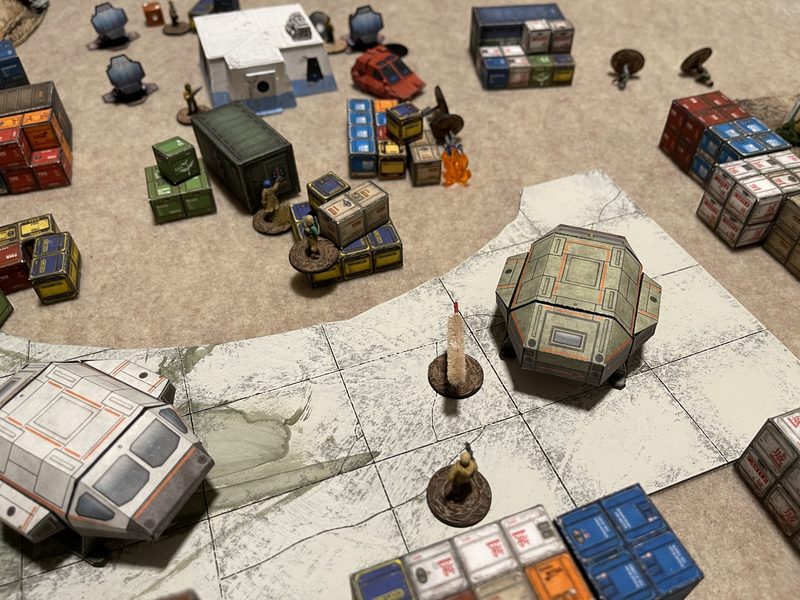 And Reda gets another shot off before Drake can react.  This hits and stuns him for a third time, taking him out and ending the fight. 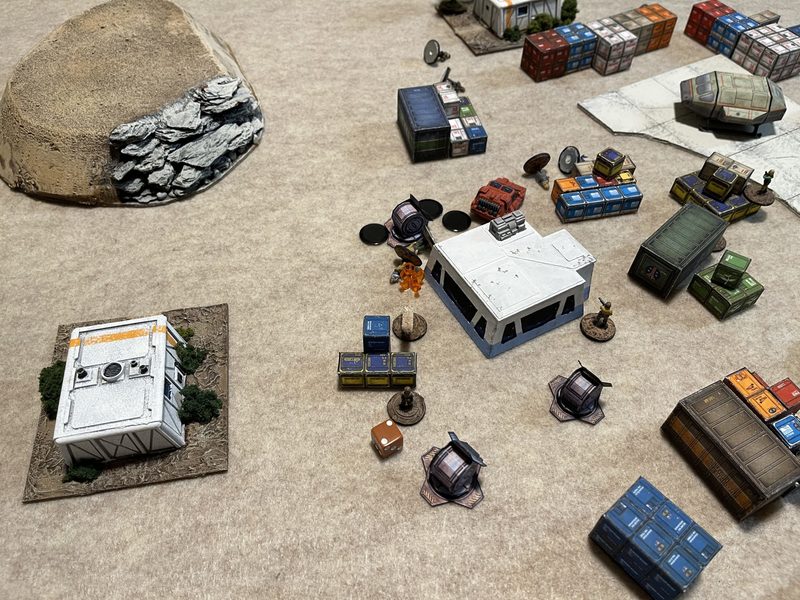 It was a pretty one-sided battle; the gangers came in half-cocked and never managed to pull together.  The aggressive AI they use keeps them advancing even when they would be better off staying in cover, so I was able to set up and let them come to me.

The crew searched Drake and found a data stick, which they pocketed to examine later.  They called the local law enforcement, who were glad to have Drake and his goons served up to them on a silver platter.  The crew received 3 credits bounty on the gang, and were able to make their equipment delivery for 3 more credits and a container of colonist rations.

The data stick turned out to have details on the equipment delivery job, including when the crew had scheduled the pickup at the freight yard.  Could this be the same unknown person who sent the vigilantes after the crew? (The data stick gave me an additional quest clue.)

Tine and Reda receive 4 xp, and the rest of the crew receive 3 xp each.  Yared, Diana, and Britt each raise their Combat Skill by 1 point.  Nobody goes shopping.

At the mining site, Britt finds out about some odd goings-on at a nearby supply depot (the campaign event produced 2 more quest clues). Meanwhile, Diana takes some time to reflect on the situation, and gains 2 xp (character event).

The crew ends this turn with 20 credits, 5 story points.  A quest and 3 clues.  They have bionic parts, 2 spare parts, a military fuel cell, the Grav Flinger, colonist supplies and basic supplies, an extra stim pack and a luxury trinket.  Their Rivals are the Jackson’s Rangers mercenaries and Lt. Isaias Cayne with the local Unity garrison.  They have one Patron: Jana Roguez, a representative for the sector government (this is from the event in campaign turn 5, and I forgot to note her in the last write-up).